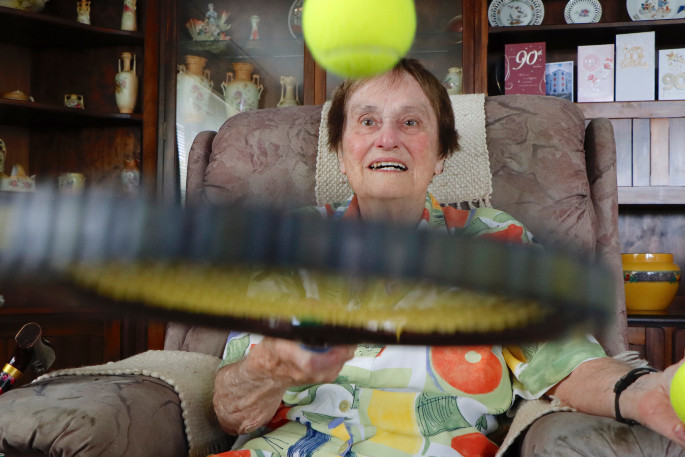 Laurel Mehaffey at play. Her leg is knackered but the eye remains good. Photo: Daniel Hines.

“One gutsy lady – on and off the tennis court.”

A close friend’s frank assessment of 90-year-old Laurel Mahaffey, an institution at the Tauranga Lawn Tennis Club and Western Bay of Plenty tennis in general.

And this week at a special function of tennis types and overlooking her Tauranga Domain courts, the noble game, the club and its cohorts honoured a woman who gave as much to tennis as an administrator as she drew from the game as a player.

“You don’t get too much of that these days,” says friend and club colleague Kay Wynn.

“Laurel is an old-fashioned stalwart – if there is something to do, she steps up and does it.”

Laurel Mehaffey was a school teacher and the disciplines of her trade extended to her tennis.

“An absolute stickler for the standards and rules,” says Laurel.

“Yes, I would be the one out measuring the height of the net and making sure the singles sticks were in.” 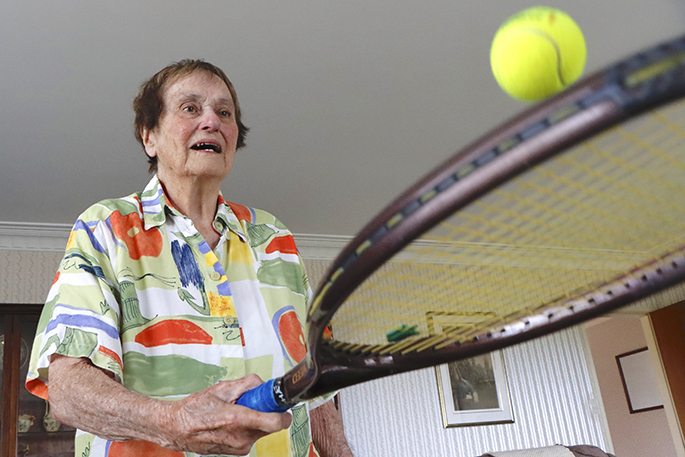 And there would no slipping the spare ball up your knickers between serves.

“I served with two balls in my hand,” says Laura coyly.

“Besides,” says Kay, “if the ball fell out of your knickers, it would be a fault.”

Laurel would never bend on rules and that may have rubbed the odd person up the wrong way. But in her day, people were brought up to respect rules.

“At school you automatically observed the rules. People didn’t think they were entitled to have long hair at school if the school rules specifically dictated you couldn’t.”

If there were rules, either at school or on the tennis court, they were there for a good reason. And Laurel played by them. She expects others to as well.

But it’s ‘thank you linesmen, thank you ball boys’ for Laura’s tennis career though. She took a tumble recently and broke her leg. Now her left legs is full of steel plates.

“And while they were in there they decided to replace the hip joint they replaced 19 years ago. The other hip was done eighteen months ago.”

The bionic lady, is there nothing original left?

“Well, I still have my teeth.”

“I advised her against the replacement,” says Kay.

That’s the gutsy in this gutsy lady.

So the tennis career that started when she was very little in Whanganui, is now kaput.

“I was the only kid in the street and I would wander down the hill and sit on the fence of the Whanganui Tennis Club - the oldest in the land - and watched them play.” 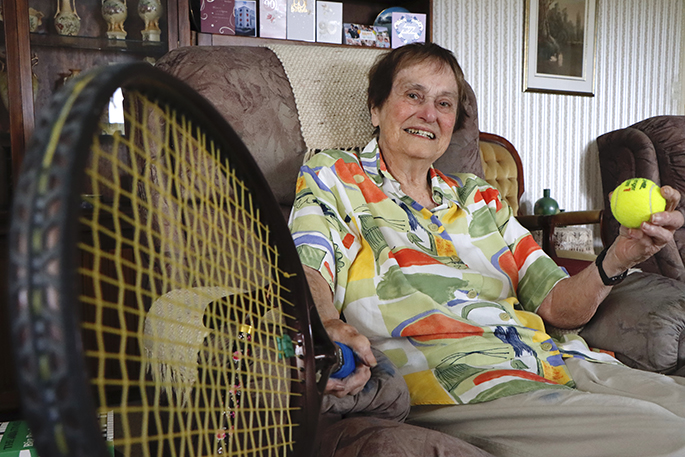 A seed was sown. And that watching interest would later develop into 17 senior women’s singles club championships.

She won 20 national age group titles, many of them with her late husband John Mehaffey, a handy all-round sportsman.

She also won a bronze medal at the world age group championships in women’s doubles in Perth in 1991. And she came home with a world ranking of 12 in the over 60 age group.

And there she was this week, just clicked over 90, with a keen eye, a wicked will, a dicky steel hip and leg, bouncing tennis ball on her recently retired racquet for The Weekend Sun photographer Daniel Hines. Not once but a dozen times.

And now the former Tauranga Lawn Tennis Club captain, midweek convenor and tournament organiser has received her greatest accolade – a show of respect and gratitude of her tennis colleagues.

“I wasn’t expecting this, I mean why would anyone bother?”

Says something about Laurel Mehaffey.