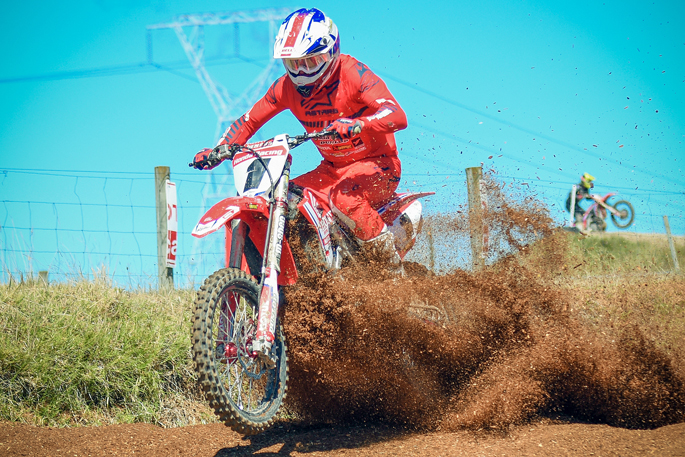 It took a full time professional from another country to finally bring down Kiwi motocross rider Cody Cooper.

Mount Maunganui man Cooper took his trusted Motul Honda CRF450 into battle at this year's four-round New Zealand Motocross Championships knowing he was a target, the No.1 emblazoned on his bike the reward for anyone who could beat him.

With his winning of seven MX1 titles over the past nine years it would always be a tough assignment for any rider hoping to take that prize away from the Honda star.

Cooper's title defence this season started when he dominated the day at the series opener at Balclutha in early February, his hat-trick of wins on the previously-untested circuit sending a clear message to his rivals.

But his nearest challenger, Australian professional Kirk Gibbs, struck back at round two near Rotorua, clawing to within six points of championship leader Cooper.

Round three at Fernhill was a disaster for Cooper as Gibbs scored his first hat-trick of wins and took over the series lead.

So when the riders arrived at Taupo's Digger McEwen Motorcycle Park for the fourth and final round on Sunday, Gibbs was five points ahead of Cooper and there was still everything to fight for.

Cooper led from the start of Sunday's first MX1 race and looked strong in front, until about two-thirds of the way through the race when forearm muscle fatigue, "arm pump", became a problem and he slipped back to finish third, behind Gibbs and West Auckland's Hamish Harwood.

"I just couldn't hang onto the bike," says 36-year-old Cooper.

With Gibbs now 10 points in front and just two races to go, Cooper needed a miraculous fight-back and there appeared a glimmer of hope when Cooper won the next race and Gibbs finished runner-up.

However, the mathematics were simple and Gibbs knew that he only needed a fourth place or better in the final race of the championship for him to take the title.

Cooper won the final race and clinched overall MX1 class honours for the day, but Gibbs settled for another runner-up finish and therefore took the title, the man from the Sunshine Coast earning Yamaha their first New Zealand MX1 title in 12 years.

Between them, Gibbs and Cooper won all 12 races for the MX1 class this season, sharing the glory six wins apiece, but it was the two third-place results for Cooper in this campaign that proved his undoing.

Cooper was gracious in defeat, paying tribute to his rival from overseas, but the Kiwi hero also vowed to win back the title next season.

"My grandfather died this week and so I didn't do much riding leading up to Taupo. I had other things on my mind," Cooper says.

"We changed a few settings on the bike this week and we got it wrong. It caused arm pump in the first race. But we got it right for the next two races and the bike was awesome.

"I'll be back next year. I love this sport. I felt good on the bike and I'm now more relaxed than before. I don't have to prove anything to anyone."

If Cooper does regain the MX1 title in 2021, he will extend his number of Kiwi MX1 title wins to eight, although he'll still be a one short of the New Zealand's most-crowned open class champion, Taranaki's Shayne King, who won nine 500cc/MX1 titles, most of them on a Honda, between the years 1989 and 2005.