Wet weather in store for much of New Zealand 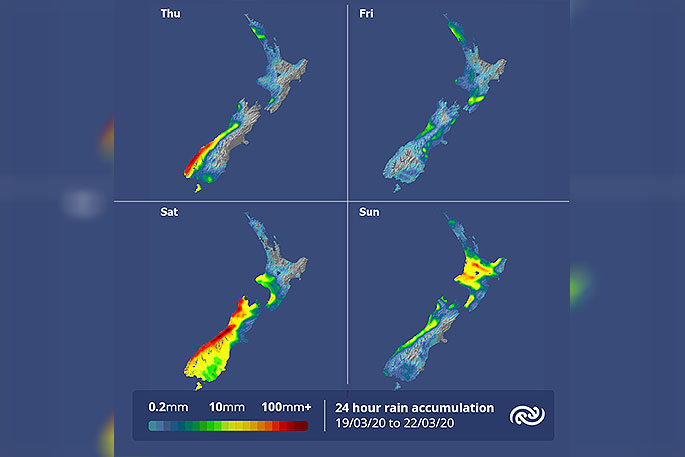 MetService is forecasting changeable weather to continue into the weekend.

A front makes its way across the country today and tomorrow, bringing showers to much of New Zealand.

The cold front moving across the South Island will drop daytime temperatures below average for this time of year tomorrow and Saturday for many.

“Places along the southern and eastern areas of the South Island will be as low as 6C below their March average," says MetService meteorologist Kyle Lee.

By the end of tomorrow, the front weakens over the North Island but a deep low takes aim at the country for the weekend.

Another front associated with the low brings rain to the South Island on Saturday, with heavier falls about western and southern areas of the South Island, and lighter rain in the east, north of Christchurch.

Then on Sunday, the North Island will be in line to get rain as the front moves northwards, unlike the weakening front tomorrow the front will be strong enough to produce wet weather for much of the Island.

Areas in the upper North Island that are in desperate need of wet weather will be welcoming the news that the front is potentially bringing a band of rain late Sunday and early Monday as the front stalls.

"There is still some uncertainty as to which areas will be benefiting the most from the rain band but closer to the end of the weekend, we should have a clearer idea of what is in store."