Through war, with love 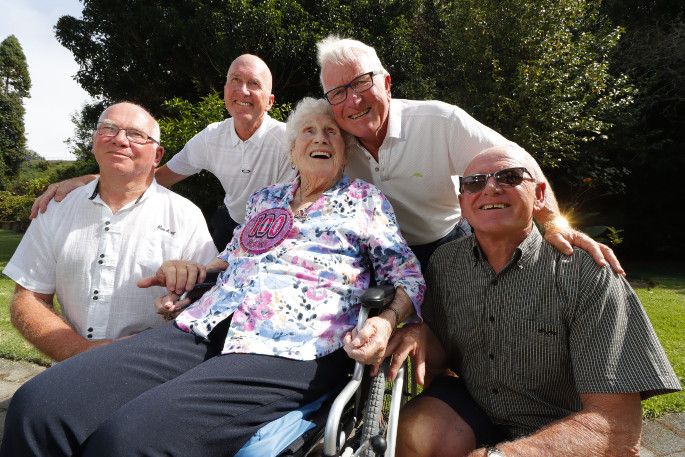 Joan Fowler cruised past 100 years this week – despite the worst efforts of wartime Germany to bomb her into oblivion, giving birth during an air raid, and a Japanese submarine plotting to send her to the bottom of the Pacific.

Terrified on every occasion.

She’s lived a chunk of her five score years on a knife edge and made at least one rash life decision - she agreed to marry a “bit of a hunk”, a Kiwi air force officer, after knowing him just three weeks.

“Oh yes, he was very nice. He was lovely.” But that was the war – no time to angst, you just got things done.

A fortuitous decision as it turned out – because she was wed to Duncan for about 70 years and had six kids with him. And when 100 years ticked over for Joan on Wednesday, four of the boys were at the Matua Lifecare Village fussing over Mum, the birthday girl with the shock of white curls, as well as a sprinkling of her 55 grand and great grandchildren.

The boys – Alex, Ross, and twins Graeme and Greg – are in their 60s and 70s and Joan still calls them “dear”, and they’re not too old to give an industrial strength hug.

The exploits of centenarian Joan Fowler begin for us in the maelstrom of WW2 when a Royal New Zealand Air Force officer Duncan Fowler, stationed at Upper Heyford RAF base in Oxfordshire, had a weekend off with a mate from the north-east fishing town of Hull, or ‘ull as locals call it. He meets a grocer shop girl called Joan and is smitten.

He must have been, because his diaries later tell of him cycling 70 kilometres through snow drifts to the nearest train station to spend just one evening with Joan of Hull. Then back fighting Hitler the very next day. That’s love.

The relationship raced ahead at a breathless rate because the same diary tells how Duncan would bundle up all his washing at the air base and post it to Joan. It would be posted back laundered, ironed and packaged.

Then the Luftwaffe came calling at Hull.

“I was at home giving birth to my eldest son Malcolm during an air raid. The bombs were dropping and exploding all around. Terrified I was.” Because she was in labour, she couldn’t be moved to the air raid shelter. They also had to ply the doctor with whiskey because, he too, was ‘scared stiff.’

Then in 1943 husband Duncan’s tour of duty was over and he was repatriated to New Zealand at short notice – leaving Joan alone in England with the baby.

“The wives and children were repatriated two years later,” says Joan. They were piled aboard the SS Rimutaka, a passenger-cargo ship, for the trip to New Zealand.

And the Japanese picked up where the Germans failed. A Japanese submarine shadowed the Rimutaka for three days and nights down through the Pacific.

“Fortunately the Duke and Duchess of Gloucester were aboard and we had three destroyers for protection. But I was very frightened.”

And all these years later she remains indebted to a crewman off the Rimutaka. “He gave me his own special life jacket. He said if the ship went down I would need it to save Malcolm. He was a very good man and made me feel very safe.”

When the Rimutaka sailed through Wellington Heads, Duncan Fowler called on an old mate, Captain Dodds, the Wellington pilot, to give him a ride out to the ship before it berthed. A surprise for Joan after two years of separation.

“I was in my cabin with my hair in curlers when there was a knock at the door. He just laughed when he saw me. Oh God, how embarrassing.” Didn’t seem to matter because Duncan hung round for another 70 years.

How about some life advice Joan? What makes you happy? After 100 years of experience and observation, you must have some pointers.

She doesn’t even have to ponder it.

“Love your kids. If the kids are happy, then I am happy.” And never be judgmental. Son Greg says she practised her own advice. Even when someone has committed a horrible crime, Joan would hope they could do something for them.

Even after all these years, even though she loves New Zealand, she is still Joan of Hull. There’s still a hint of the official regional twang.

“Of course there is, I am a Pom.” A Pom proudly flying New Zealand colours.

Then she’s off for a special 100th birthday treat. Fish ‘n chips. “Love them.”