Connolly wraps up title with two races to spare 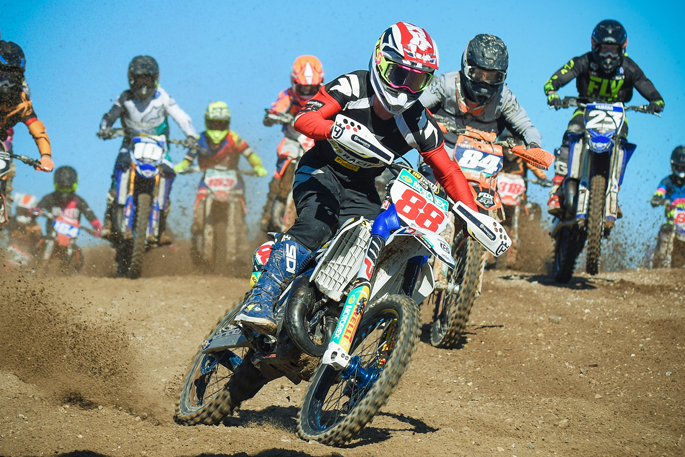 The only pressure on Bay of Plenty's Brodie Connolly at the weekend was that which he applied to himself.

The LMC Husqvarna Racing Team rider from Tauranga showed up at the fourth and final round of the senior New Zealand Motocross Championships in Taupo on Sunday with one hand already on the 125cc class crown.

With points from two entire races up his sleeve and just three more 125cc class races on Sunday to wrap up the 2020 championship, the mature teenager knew that a safe and steady approach was the order of the day.

He was entered also for the first time at this event in the MX2 (250cc) class, with an LMC Racing Team Husqvarna FC250 four-stroke bike also standing ready for him in pit lane, but Connolly opted not to line up for the opening MX2 class race on Sunday, wanting to ensure he had first completed his main order of business ... grabbing the 125cc trophy.

He led from start to finish in the first of three 125cc class races, finishing that outing ahead of Tauranga's Madoc Dixon, and so it was "job done", the 2020 125cc national title his for the keeping.

He then went out in the second MX2 race of the day, managing a creditable sixth placing on debut, before switching back to his 125cc Husqvarna to wrap up that championship with a couple of runner-up finishes.

Unfortunately, absolutely shattered, the 16-year-old Connolly was forced to withdraw from the final MX2 class race of the day.

However, with nine wins and three runner-up finishes from 12 starts (three races at each of the four rounds), there was no denying the dominance of Connolly in the 125cc class.

"I knew I only had to finish about top 10 in my first 125cc race to get the title," said Connolly afterwards.

"I didn't want anything silly to happen, so I didn't risk racing the MX2 class races until, after I'd wrapped up the 125 title."

Connolly made his senior 125cc debut in the nationals last season, but a huge crash at the 2019 series opener saw him sidelined for most of that year.

"It's good to get the job done this year," he says.

"I'm hoping to get over to Australia now and see if I can race the nationals there, but there are questions now about that competition going ahead because of fears about Coronavirus."