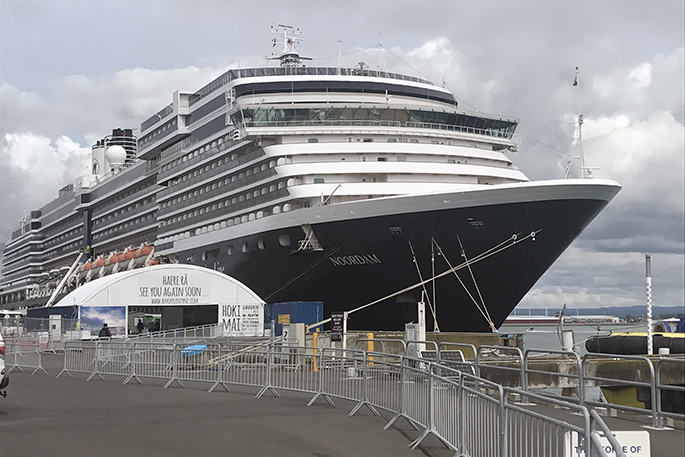 The Noordam remains in port, with only crew on board, until arrangements can be made to relocate the vessel.

All cruise ships due to visit the Port of Tauranga have been cancelled.

This follows the Government's temporary ban on cruise ships on Saturday.

"This did not affect cruise ships already in New Zealand waters," says a Port of Tauranga spokesperson.

"Most cruise ships in New Zealand waters have abandoned their current itineraries and are making arrangements to repatriate their passengers."

On Sunday, the Ruby Princess, which was due to arrive at Port of Tauranga early this morning, was redirected to Australia, bypassing its scheduled visits to both Tauranga and Auckland.

The Bremen arrived from Napier on Sunday night.

"The Bremen has been cruising in Antarctica and New Zealand since the beginning of February.

"Its current cruise began in Bluff nearly two weeks ago. Public health authorities are satisfied that there is no disease risk from the crew and passengers on board."

The Bremen will leave Port of Tauranga at about 6pm, bound for Auckland.

All other cruise ship visits due at Port of Tauranga have been cancelled.

"The Noordam remains in port, with only crew on board, until arrangements can be made to relocate the vessel.

"Port of Tauranga Limited's revenue will be impacted, but not materially, by the loss of the berthing and service fees expected from the 16 cancelled cruise ship bookings.

"Port of Tauranga does not expect any job losses from the cancellations, as its cruise ship-related seasonal staff will be redeployed to other duties.

"The loss of cruise ship visits will allow the Port to more efficiently manage the kiwifruit bulk export season, which begins today using the northernmost berths of the port's Mount Maunganui wharves."

Cargo ships and their crew members remain subject to the strict border controls already in place.

The rules are administered by the public health unit of the Bay of Plenty District Health Board.

"Within 24 hours of expected arrival in New Zealand, cargo ships must declare if there is any illness on board and are not allowed to berth unless public health staff are satisfied there is no risk.

"Because of the Covid-19 outbreak, ship captains must also declare whether the ship, or anyone on board, has been in a Covid-19 hot spot within the previous 14 days.

"We have multiple measures in place to protect the health of all Port of Tauranga staff, including the provision of protective equipment, the cancellation of international travel and ensuring that those staff able to work from home can do so if necessary."

.....Jessetheman. That is just plain stupid. These crew don’t have CoVID-19 or any other Coronovirus, so why shouldn’t they get off the ship? There are a lot of people in our community who just don’t understand these type of virus and their transmission.

If you were crew on an ocean-going vessel that spends considerable time at sea, you would be very glad to get your feet on shore for a while, when the chance arose. We need to make sure that crew CAN disembark SAFELY. (For them and for us...). It is quite feasible to test the crew before they even arrive. Passengers are another story (because of the numbers) but as long as the current self-isolation requirement is properly enforced, we should be reasonably safe.

ALL CREW should remain on board as long as the ship is in ANY NZ port.There is no need for any crew to disembark.ALL passengers on Cruise ships should be tested as they disembark