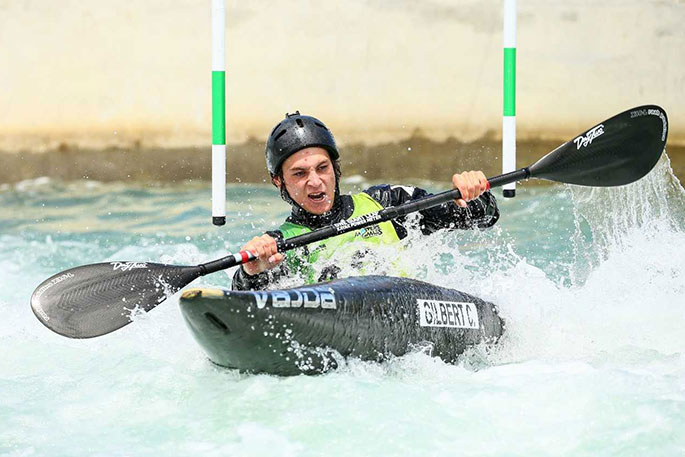 Olympic silver medallist Luuka Jones and Olympic newcomer Callum Gilbert have been selected to the New Zealand Team for Tokyo 2020.

The canoe slalom athletes were named at an event at Wero Whitewater Park (the home of Canoe Slalom New Zealand’s High Performance Centre) in Auckland.

Tokyo 2020 will be the fourth Olympic Games for 31-year-old Jones, while Gilbert will be making his Olympic debut after giving up his job as a software engineer to chase his sporting dreams.

“I’m over the moon, it’s been a long time coming and a lot of work has gone into this so I’m so stoked to have it made official,” says 24-year-old Gilbert.

“I still get excited even though this is the fourth time I’ve been named,” says Jones. “It’s an amazing opportunity to go to an Olympic Games and I’ve been really fortunate to have gone to so many.”

“Competing in both events adds another element to the Olympic Games and it's an awesome opportunity to earn a medal,” says Jones.

“My goal is the same as it was at Rio 2016 and that’s to prepare really well and put down a performance that I can be proud of. We’re working really hard and I’m in a really good place in my paddling career, from a performance perspective.”

Both athletes are originally from Tauranga but Gilbert now calls Okere Falls, 20km north of Rotorua in Bay of Plenty heartland, home.

“When I was 12, I got into an after school paddling class then when I attended Tauranga Boys College a teacher picked a few of us to attend nationals. From there, I loved it and that was it.”

Gilbert has a degree in computer science and was working as a software engineer but gave up his day job three years ago to focus fully on his paddling.

“My employers were great but I wasn’t able to give 100 per cent to my training while I was there so I made the decision to resign. Looking back on it now it was a good decision and it’s been awesome being able to fully commit to the sport.”

Gilbert had a strong year on the world tour in 2019, with his top result a fifth place at the London World Cup.

He heads overseas shortly to train and compete in further World Cups.

Jones will also be based overseas from mid-April. She’s already spent a lot of time at the Olympic venue and will be back there before the Games.

“I really like the venue, it’s got some similar factors to the Wero facility where we train every day. It’s actually built by the same people. I don’t think there is anything too difficult about the venue but spending a lot of time there will be an advantage,” says Jones.

NZOC CEO Kereyn Smith extended her congratulations to the athletes.

“We’re a proud nation when it comes to water sports and canoe slalom is no exception.

“At Rio 2016, we saw a historic medal, a silver medal, our first ever in this discipline, and we’re extremely pleased that Luuka is joining us for another campaign.

“With Callum also selected there’s a great mixture of experience and exciting new talent in this team so we can’t wait to watch these athletes compete in Tokyo.”

Jones is coached by Campbell Walsh while Gilbert is coached by Paul Macdermid of Massey University. Macdermid coaches Gilbert online and remotely, with the pair talking over the phone to analyse footage and work on technique.

Finn Butcher has been conditionally selected as a non-travelling reserve.

The naming takes the total number of athletes selected to the New Zealand Team to nine.

Further information about canoe slalom at Tokyo 2020 can be found here.