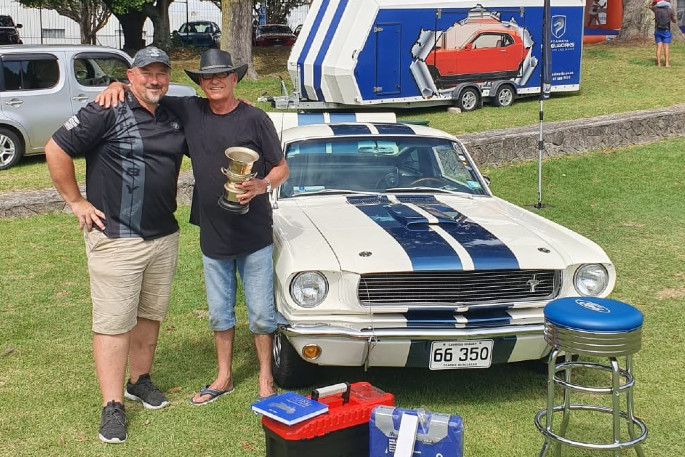 The opportunity to get up close and personal with all things Ford drew around 2000 people to the Tauranga Ford Muscle Car Club’s annual show day at Wharepai Domain.

There were 342 vehicles on display with exhibits ranging from Model T’s right through to brand new Mustang cars, says organiser Barry Gordon.

As owner of RM Motor Trimmers in Gate Pa, Ross has been around vehicles all his life, having started work as an auto upholsterer at age 14.

His dad had a Ford and that sparked his interest but Ross’s passion for muscle cars really developed in his late teens when he was around 19.

“I just really liked the look of them,” he says.

When Ross bought the car 13 years ago it was a standard ’66 Fastback. It’s taken about 12 years of effort and dedication to convert it into the Shelby Tribute it is now.

Ross says he’s happy to have won the top show award but admits the transformation process has had its ups and downs.

“Some days you want to chuck the towel in and other days you’ve just got to walk away from it.

“You start all keen but you’ve got to keep being enthusiastic otherwise your standard drops,” says Ross.

The All Ford show has been running for 21 years and was originally held at Blake Park up until two years ago when growth resulted in the need for a bigger venue.

The name Shelby is legendary among Ford fans.

Together they turned out high-performance vehicles that has put Shelby Mustang GT350’s firmly on the sports car radar of automotive fans globally ever since.

A new event at this year’s show was the Ms Retro Best Dressed competition. It was won by local hair and makeup artist, Jessica Caulfield.