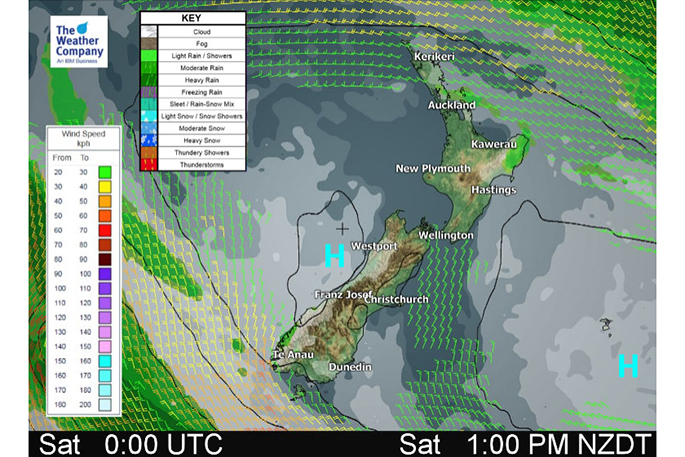 “An east to southeasterly airflow around this high will bring a few showers to some northeastern areas,” says Weather Analyst Aaron Wilkinson.

For Northland, Auckland, Waikato and the Bay Of Plenty, the temperature highs will range from 20-26 degrees Celsius. The weather should be mostly sunny, with some cloud about Coromandel, Great Barrier Island and Northland bringing the odd shower at times.

There will be winds mostly from the southeast for western Waikato up through to western Northland and also the Bay of Plenty, however a sea breeze will be developing in the afternoon.

In Western North Island, including Central North Island, expect a sunny day with light winds tending westerly in the afternoon and highs ranging from 19-24 degrees Celsius.

Morning cloud should clear in Eastern North Island, and then the day should remain mostly sunny. Some cloud will hang about Gisborne bringing a shower or two but will clear in the afternoon. Expect northeasterly winds there and highs of 21-23 degrees Celsius.

For Wellington it’s a mostly sunny day with northerly breezes and an expected high of 20. Marlborough and Nelson will also have a sunny day with afternoon north to northwesterly winds and highs of 21-26 degrees Celsius.

It’s a sunny day for Canterbury with light winds, and any morning cloud will be clearing. Expect highs there today of 22-25 degrees, and an overnight southwest change will bring some cloud.

On the West Coast there will be cloudy areas at times for South Westland although sunny spells are expected to break through in the afternoon, with some drizzle at times for Fiordland. Further north conditions are sunnier although expect some cloud at times, light west to northwesterly winds and highs of 18-22.

It’s a mostly sunny day ahead in Southland and Otago with light winds, highs of 20-25 degrees, and some high cloud slowly moving in from the afternoon.