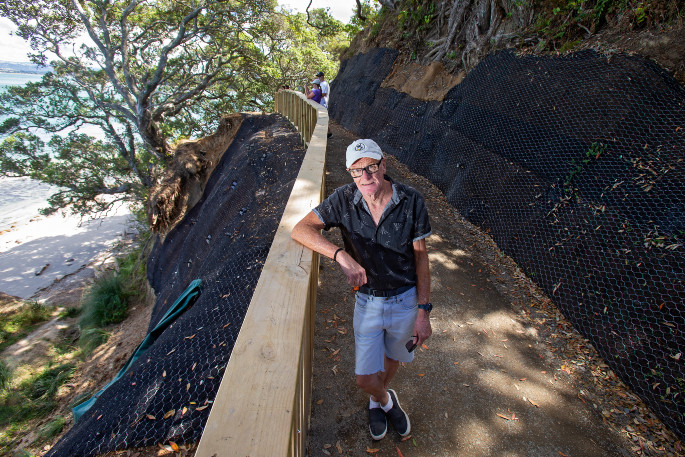 Red Satchell is back walking around the Mauao Base Track now that repairs have been completed. Photo: John Borren.

Repairs to the Mauao Base Track have officially been completed, allowing people to walk the full circuit without having to use stairs.

The repaired section reopened on March 6, marking the conclusion of a successful project for iwi and the council after the track section was destroyed by a slip in April 2017.

A pre-Christmas repair blitz by council staff and contractors successfully allowed the section to open for the busy holiday season. It was temporarily closed again last month for improvements such as boring drains and stabilising banks with ‘soil nails’.

Otumoetai resident, Red Satchell heads over to walk the Mauao Base Track every day or two.

“When the slip happened it was a bugger because they closed it. It wasn’t too much of a drama because you could walk from the Surf Club end and turn around and come back,” says Red. 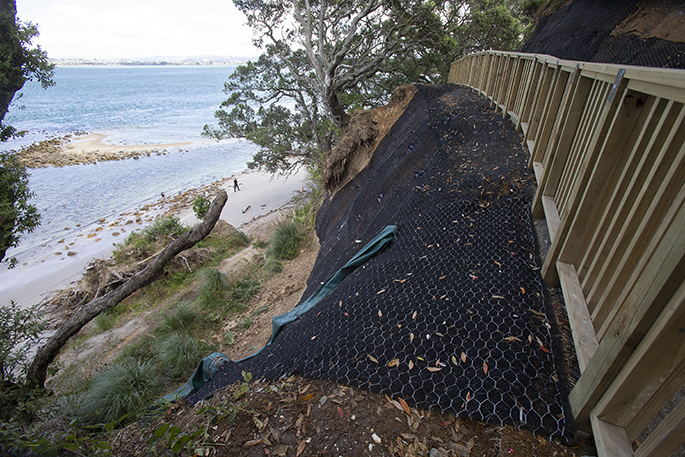 Now that the track has re-opened, Red says it’s brilliant and the council has done a really good job.

“It’s what people come to the Mount for. They come to the beach and they come for a walk around the Mount. There are heaps of people that use it.

“It’s what it needed and you see the same people day after day, so it gets used.

“In another way, I hope they leave the stairs in because if you go to the top of the stairs there is a bit of a lookout point and I hope they don’t go, we don’t need them and take them out for some reason. I would like to see the stairs left in for the people who do want to have a bit of a workout and get up the top there and have a look at the view,” says Red.

The opening is especially good news for people with limited mobility, including those using prams and wheelchairs.

“The success of this project is a testament to the strong working relationship between council and the Mauao Trust,” says Mayor Tenby Powell.

“It’s been fantastic to see so many people out walking the track over summer, and the new section will ensure that more people can enjoy our city’s greatest taonga.”

The Mauao Trust has guided council staff in their engagement with experts to ensure the maunga is safe and accessible. The Trust represents the three iwi of Tauranga Moana, who collectively own Mauao.

“This is a great example of how iwi and Council can collaborate by engaging early, face-to-face, and with the right information,” says Dean Flavell, the chairman of Nga Poutiri Ao o Mauao joint management body.

“That process has built confidence in moving towards a practical outcome for the community.”

Council initially budgeted $4.65 million for a plan to re-route the track along the shore. The new plan, to re-build the track close to the old route, is expected to cost less than a revised budget of $718,600.

I for one am truly grateful for the effort Tenby Powell has put in to pushing this project forward. With the support of Steve Morris, our local TCC Papamoa - Mount Board rep. of course This is probably the most popular walk in the whole of NZ. It shows that common sense is not as uncommon as I had initially thought. The message for us as ratepayers is to also look at various other projects the Council pays for which are probably as exorbitantly over-priced as was the five million plus dollars cost recommended by that consultancy firm the TCC used previously .

Well done, to all concerned. Hopefully, ludicrous tenders like this will continue to be checked. Somebody obviously thought that a Council contract is a licence to print money...

It could be done not costing millions.Someone was trying to rip off ratepayers.

Council staff must explain why they said the initial cost would be $4 million. That ridiculous cost led to councillors sensibly putting a hold on it and sending it back to the drawing board. Why isn’t the new full cost now available? It should be public. Surely it was put out for tender?