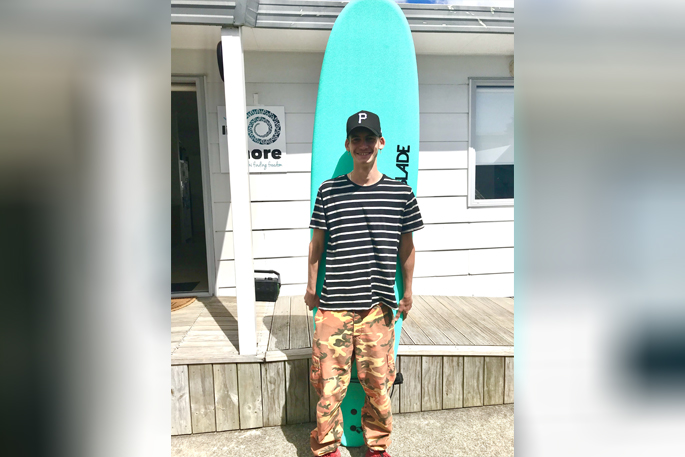 Robert Bull with his surfboard he received from Live for More last week. Image: Supplied.

A Tauranga teenager reckons a surf-therapy programme has kept him out of jail and completely turned his life around.

Robert left Tauranga Boys College when he was 15.

“After I left school things started getting real hard.”

He found himself robbing banks and stealing cars while battling anger issues and suicidal thoughts.

This changed everything for the 19-year-old.

“I went down a dark road – going to court week after week. I got so close to going to prison – but I got probation and had to complete 240 hours of community work.

“Then they put me onto this course – it changed my life and moved me into the right state of mind.”

“I thought I would go back to committing crimes.”

This wasn’t the case at all.

“Getting out on the water and talking to people about life has helped me so much. Life just stopped being so hard when I found Live for More.”

“Going for a surf makes me forget everything. When I started I was having suicidal thoughts and had bad anger problems – that has all changed.”

The 19-year-old is now on the right track. Robert has completed his community work hours and is doing a course at Bay Pathways to gain his NCEA qualifications.

Once he has gained NCEA qualifications, he is eager to land a full-time job.

The main message Robert wants to spread is one of hope.

“I just want to try and get other people to go on the course so they can get help too – especially people in the same boat that I was.”

Live for More provides ongoing support to youth after they have completed the eight-week programme.

And Robert still heads out for surfs with the team every other week, since graduating from Tai Watea last year.

Last Friday, Robert received his own surfboard, after getting 250 points in Live for More’s ‘do the mahi, get the treats’ points system.

Youth gain points by getting employed, being punctual, enrolling into courses and completing community work hours.

Live for More youth navigator Sean McGuinniety says he is blown away by Robert’s transformation.

“When we first met Robert, he was shy and reserved. I picked him up one time and he was totally silent – he just lacked confidence.

“He has the most amazing smile, but at first he always kept a straight face.

“But in week five, Robert started smiling – and oh my gosh. The room would just start cheering and clapping when his smile broke out.”

Being out on the water and catching waves also boosted Robert’s confidence, says Sean.

“It was just such a massive turnaround, I am pretty proud of him.”

Sean says they strive to help youth find employment and education opportunities, but continue to support them no matter what.

“The guys that are still trying to find work continue to engage with us – and that’s where we use the surf therapy tool.

“If they have had a relapse throughout the week, they come on Friday to release that stress. We are always here for them.”

Robert echoes this sentiment, saying he knows he can lean on the Live for More team for support at any time.

As of October 2018, Live for More has worked with 33 young people, 29 youth have graduated from Tai Watea and 11 of those have received their own surfboard.

Robert says he can’t quite describe how good surfing makes him feel.

“You fall from a wave, and just get back up. You know you can keep going out there just to get your mind off stuff.

“I still have ups and downs, but I love life a little bit more every day.”

Live for More is a charitable trust that relies on community support for funding. They are putting a call out to Bay of Plenty residents and business who may want to sponsor surfboards for youth going through the programme.

This is such an awesome and inspiring story. Sincerest ongratulations Robert. Well done mate. Thank you too to Live for More. I’ve never heard of the organization but obviously you’re doing miraculously in people’s lives. It’s not just one person you impact, it’s the ripple effect that touches the lives and hearts of so many. This is such an inspiring article.