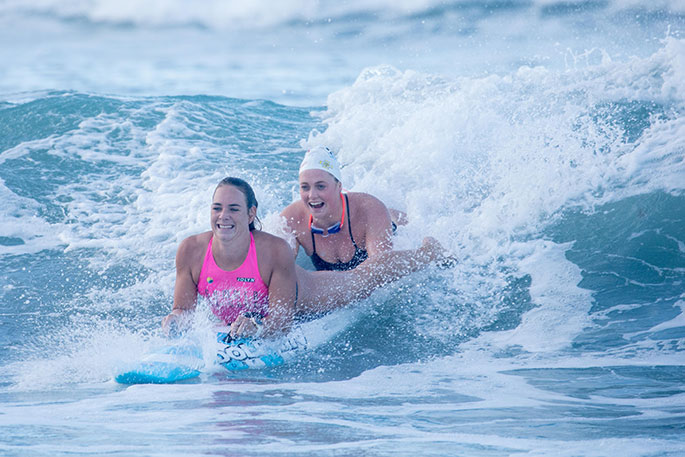 Mount Maunganui's Amy Barron (left) and Libby Bradley get in some board rescue training ahead of this week's national surf lifesaving championships. Photo by Jamie Troughton/Dscribe Media

The Bay of Plenty club will be searching for an 11th-consecutive crown in the over-30s division, boasting a 39-strong contingent which dwarfs all other local clubs.

Omanu also have 43 under-16, under-19 and open competitors competing, with their competition starting Friday and carrying through until Sunday.

Mount Maunganui will also be looking to continue an impressive streak; the club - which features a 79-strong senior squad and 14 masters - has won the Allan Gardner Trophy as top club for the last seven years, capturing a 10th title overall last year on home sand.

Papamoa also has 22 open competitors and seven masters competing, while Opotiki, Whakatane, Pukehina and Waihi Beach are the other Bay of Plenty clubs attending.

The last day of the competition will be available to watch free to air on the Sky Sport Next YouTube channel. Go to www.youtube.com/skysportnext to subscribe.