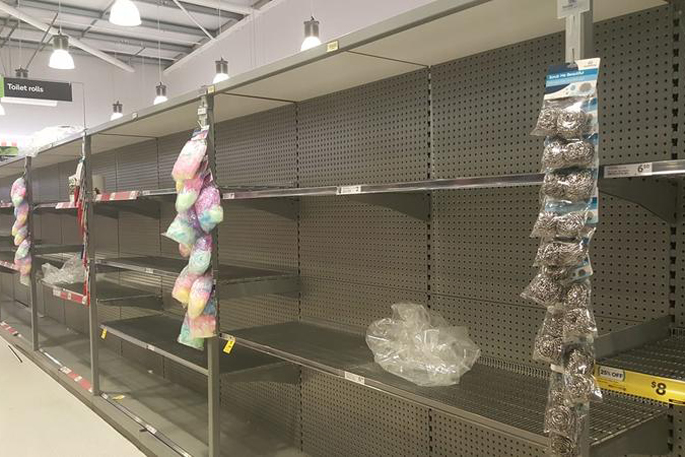 Shelves of toilet paper were emptied at this supermarket after news of the first New Zealand case of the Covid-19 coronavirus. Photo: Jo T Lawton / Supplied

New Zealanders have been stocking up on rubber gloves and pasta as the Covid-19 coronavirus continues to spread.

While Australians are scrapping over toilet paper, figures show New Zealanders are also stocking up on cleaning products, canned goods and baking ingredients.

New Zealand's first case of coronavirus was confirmed just 11 days ago, on 28 February. In the days since, supermarkets felt the rush as shoppers cleared the shelves.

Market research company IRI has released figures for the week ending 1 March which showed a 14 percent increase for the week on the year before.

Managing director Craig Irwin says in the three days from the confirmation of the first case, sales increased $38 million more than the same week last year.

"It's in the obvious categories that you would have expected, right - so, toilet paper, water, even dietary supplements.

"This at the moment is the fifth biggest week of the year and the only other weeks that beat it are the four weeks around Christmas and there's no other reason that this should be up that high other than the impact of the panic buying," says Craig.

The increase in confirmed coronavirus cases was likely to cause the trend to continue for the next few weeks, he says.

"We also saw quite a big spike in rubber gloves for shelf stable foods.

"It is things like rice, flour, canned food, and then we're also seeing toilet paper and, strangely, candles and matches also seeing quite a big lift."

The increase in ingredients and pre-prepared meals was great for supermarket and food retailers, but Craig suspects it’s not so good for the hospitality industry, as people chose to dine at home.

"Hearing from restaurateurs where they're saying numbers are down and if you look at that and our numbers and look at what is being purchased in the grocery store you can start to join those two together and go 'well, people are deciding maybe not to go out into the public places where they are with a large group of people.”

People on the streets were not too concerned, and had not been adding anything extra to the trolley. One said that, if it came to it, he could go without toilet paper for a couple of days.

Cottonsoft has been trying to prevent exactly that. In a statement, the toilet paper producer and distributor says its production plants in Dunedin and Christchurch were extending their hours to keep up with demand.

"The recent unprecedented panic buying of toilet paper has resulted in many retailers seeing empty shelves, resulting in many households being deprived of the ability to purchase essential household commodities, however, toilet paper seems to have borne the brunt of this impact."

Cottonsoft says it would be limiting the range of products it made, to ensure availability of toilet paper.

...is NOT an essential item. I lived in Asia for some time and they never used it. There is a jug of water by the toilet and you pour the water with one hand and wipe with the other. Then you REALLY wash your hands... :-) At first it seemed gross but after a few days it became completely normal. Home in Tauranga, I use toilet paper like everybody else, but I could easily live without it.

Yesterday, in Pak n Save, it was bedlam. Lunchtime on a Monday is usually fairly quiet but yesterday, definitely not so. Not only were there many more people with overfull trolleys, there were, what I assume was dairy owners, in groups with several trolleys and yes, they had toilet paper, but also chocolate, biscuits, energy drinks and fizzy drinks. Everyone’s emergency supplies?