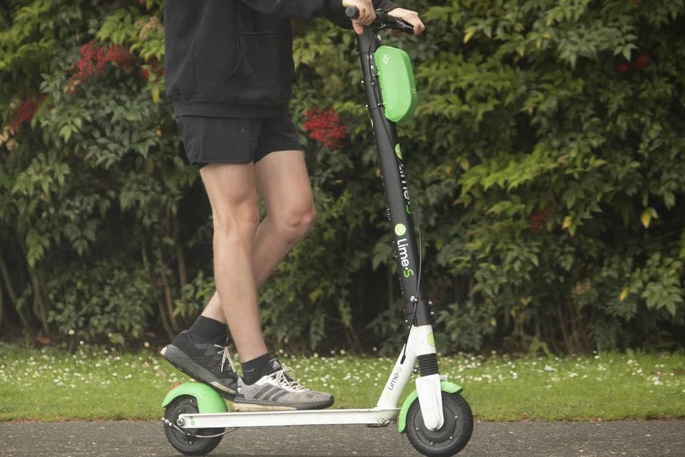 An example of an e-scooter.

The Government is looking at ways to make footpaths more pedestrian friendly as new forms of transport such as e-scooters change the way people get around.

“This package looks at how we can make our streets safer for those going from A to B, particularly young children when they are learning to ride bikes, and ensuring our road rules reflect real life,” says  Associate Transport Minister Julie Anne Genter.

“How we travel around our streets and footpaths is changing as more Kiwis choose to walk, cycle, and use new forms of mobility like e-scooters.

“New transport technologies like e-scooters are convenient, fun and help ease congestion, but we need to a balanced approach to ensure pedestrians retain priority on our footpaths.

“We expect mobility scooters, including those used by people with a disability, would continue to be used on the footpath as normal, as most models available are within the 75cm width limit.

“A lot of parents have called for kids to be able to cycle on the footpath so they can ride with confidence away from traffic. We want to know whether people support cycles being used on footpaths at low speeds, whether they think it should be limited only to kids under 16, or whether cycling should continue to be banned from footpaths.

“To keep people safe on the road we’re also suggesting a minimum overtaking gap of either 1 metre or 1.5 metres, depending on the speed limit, for motorists when passing people riding horses, riding devices like e-scooters, cycling, or walking on roads without footpaths – which we know is a gap most people already try to give.

“Everyone has a right to feel safe on the road and close passes at speed are not only scary, they can be fatal,” says Julie Anne Genter.

Other minor changes in the package to simplify and clarify road rules include:

The consultation will be open from March 9 to April 22.

Before e scooters the footpaths were safe,The only speed safe on them is walking pace,Seniors with hearing problems isnt going to hear a escooter at any speed.cyclist are not allowedto ride on th footpath.Yet we going to have a motorised scooter,with no safety equipment going to be allowed to drive on the footpath,on the road on the cycle lane is the only place for them,before someone gets killed.

E Scooters have cost ACC over $7 million dollars so far are they worth it with the accidents we are getting.Should not be allowed on footpaths.People coming out of shop doorways and drives are at risk.

Well what s turn up for the books footpaths are for people on foot. Wish all the cyclists understood this as they whizz along even with cycle lanes next to them. A lot of kids with no perception of what damage momentum and lack of judgement causes. I worry for them with vehicles backing out and pedestrians who unsteady on their feet like me unconsciously weave a bit. Bike lanes are provided at great expense and sometimes detriment to traffic flow so they should always be used as first option