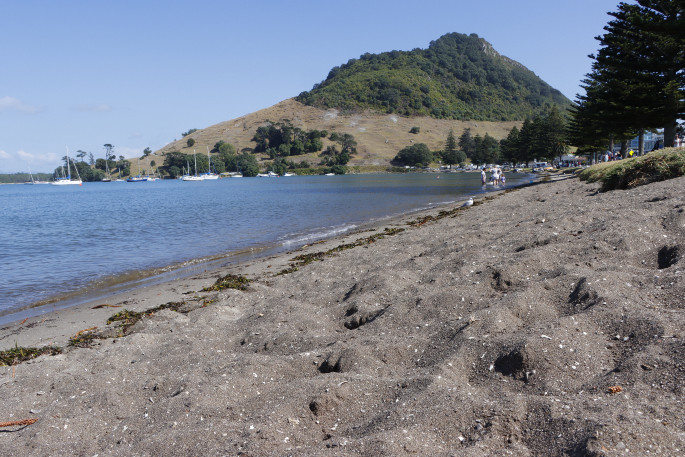 Over recent years, the grass has gotten bigger and the sand area has gotten slightly smaller at Pilot Bay. Photo: Bruce Barnard.

Sand is something we lie on, walk the dogs on, play cricket on – so many things come to mind when someone says sand, but how do our beaches and bays stay sandy?

Around Tauranga, there are four main beach areas - Papamoa Beach, Marine Parade Beaches, along the inner harbour there is Pilot Bay and Matua Peninsula.

With many beaches and bays also comes erosion. Tauranga City Council manager of spaces and places Mark Smith says erosion is happening at a slow rate within the harbour.

“The rate of erosion along our biggest beaches - Papamoa Beach and Marine Parade Beaches - is currently neutral, or slightly in accretion.

“In general terms, this happens when during the winter storms erode sand and during the summer the sand is deposited. This is why the work to restore the dunes right along our coastal reserve was really important because it helps to reduce the level of erosion that we experience in these areas and builds up protection from future storms,” says Mark.

Bay of Plenty Regional Council completes annual beach profiling in January and February at 53 points along the Bay of Plenty coastline from Opape in the east to Waihi Beach in the west.

Beach profiling involves using survey equipment to take cross-sectional measurements of the beach; starting from a benchmark located behind the frontal dune and moving seawards towards the low tide mark and often beyond. Data collected is then used to determine if a beach is in a state of accretion (receding), stable or erosion.

The programme was initially setup in the 1970s by Professor Terry Healy from the University of Waikato, says Bay of Plenty Regional Council’s science team leader, coastal land and air, Shane Iremonger.

“Staff from the Environmental Data Service team at Regional Council undertakes the collection of measurement data for this programme and the quality control of the information gathered. Summer students are often used to help with this work.

“More recently the inclusion of laser and drone technology has provided more information such as digital terrain models and high-resolution imagery. Both datasets will be valuable in monitoring this very dynamic area of the environment and provide useful information for ongoing coastal hazard analysis work,” says Shane.

As overall beach maintenance, sand is replenished by the Tauranga City Council along Pilot Bay and along the Matua Peninsula about once a year.

“Coast Care has been responsible for the restoration of the sand dunes around Tauranga Moana for the last 25 years and as a result the seaward facing beaches are well developed and stable.”

Shane says given the dynamic nature of this part of the environment and the frequency of monitoring, the changes from one survey to the next can be quite dramatic.

“The movement of sediment is dependent on wind and wave action over time. Marked erosion and loss of parts of the dune system can occur – quite often if a coastal storm has just passed. Conversely accretion can be present whereby new dunes are forming,” says Shane.

Members of the public are encouraged to join in with Coast Care Bay of Plenty with their community planting days. To get involved, head to the Coast Care section on the Bay of Plenty Regional Council’s website.