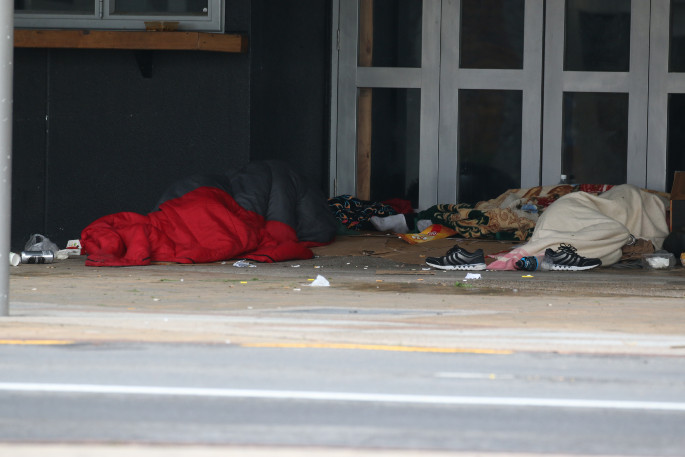 The council has revoked an earlier bylaw that banned rough sleeping and begging from shop fronts. Photo: Daniel Hines.

Tauranga’s controversial begging ban, which only came into force in April last year, has been revoked.

Councillors voted six-four in favour of ditching the bylaw at a meeting last week.

The bylaw prevents people from begging and rough sleeping within five metres of public entrances to retail or hospitality premises in the Tauranga City, Mount Maunganui and Greerton CBDs.

Tauranga Mayor Tenby Powell says the bylaw would not have withstood a legal challenge and he is working to solve the problem “strategically and sustainably”.

He says the previous council spent more than $100,000 on legal advice on the begging bylaw before they imposed it.

“All that advice was not to impose the bylaw because if challenged legally under the Bill of Rights, it will not pass the test.”

He says the estimated cost of defending that legal challenge would be around $200,000.

“I am not prepared to expose the ratepayers to $200,000 of costs on a case that we had been told by everyone that we will not win.”

Tenby and Western Bay of Plenty Mayor Garry Weber are working collaboratively to launch a “conjoint taskforce”, addressing homelessness and poverty in the WBOP.

“Out of that, we will drop some very practical initiatives to manage all the issues that we are concerned about in this city.”

The taskforce will see ‘ambassadors’ out on the streets of Tauranga.

“It’s all around making sure that we have staff with the social and interpersonal skills to calm things down if they get to a point where it becomes worrying for retailers and shoppers.”

He reiterates that any anti-social and criminal behaviour will be dealt with by the police.

Changes to the bylaw will take effect on March 6.

Last year, councillor Heidi Hughes told SunLive the ban sends a very unbalanced message to the most vulnerable people to say that they are not welcome.

The CBD is already dead and they are just making sure it is well and truly dead. I arrive at work really early and most days see shop owners sweeping, mopping down the front of their store. Perhaps we should try something new. Give the rough sleepers/homeless people a job. Pay them to clean down the shop fronts. Its a win-win I reckon.

Since when was Tenby Powell a Judge

How does this mayor know that Council would lose a judgement in Court over what is a fair and just bylaw. You can’t beg within a few feet of someone’s business premises. Once again good law abiding and hard working citizens are penalised. I’m sure if I begged in the doorway of the Courthouse or Police station I’d be booted out. Would that infringe my human rights? No. The only thing this new council mayor know how to do is waste even more money.

This is truly breathtaking in the scope of stupidity.

Let me get this right...

...TCC spent $100,000s implementing an unenforceable Law and revoking it IN CASE it was challenged, so they can claim they saved us $200,000 if it had been challenged? Meanwhile, we are short of cash so let’s "courageously" squeeze the Ratepayers again... This just beggars belief. Is it any wonder that TCC has little credibility with the people of Tauranga? All we see is "same old same old" and that "same old" is stupidity and lack of common sense, combined with a total disrespect for "other people’s money". I had hoped Tenby Powell would improve things; like many others, I’m disappointed.

YES - the COUNCIL wants a 12.6% rates increase and they "p. . . " around with the slime in the streets that EVERY RATEPAYER AND SHOP OWNER wants GONE Why are the residents not shopping in the CDB, Main Street at the Mount, and Greerton ?? Because of the SCUM on the footpaths DEMANDING money. The MALLS have the ability to KICK THEM OUT !!!

SO it now seems

That the shopkeepers need to install late night "cleaning" showers in their shop fronts! YES motion activated sensors that SPRAY water in their shop fronts - to "CLEAN the SHOP FRONT / DOORWAY" late at night - especially when the motion detector indicates that there is some dog about to leave something in their doorway !!!

Unusual excuse to have hobos back sleeping.,begging, toileting in shop door ways. We never had them in the past, I thought this council had promise No, but how about publishing your addresses and allowing these people to kip at your place

Least we forget at the next local election

So why waste all this time on issues like this when the council needs to get a handle on myriad problems of how to wring more money from there customers the ratepayers and make it sound like a good idea. In spite of the sailing ship called Tauranga being blown which ever way the wind blows with seemingly little direction or control

Who - was going to challenge the by-law? THe beggars? LEts revoke it - just in case someone challenges it and it will cost 200k Why not leave it instated and don’t defend it in the VERY unlikely chance of a legal battle Problem Solved !! No common sense in council obviously

Just when you think the bureaucrats at the Council could not do anything more stupid they find a way to surprise us. What else can I possibly do to make the city less desirable. I am sure they will find something else.