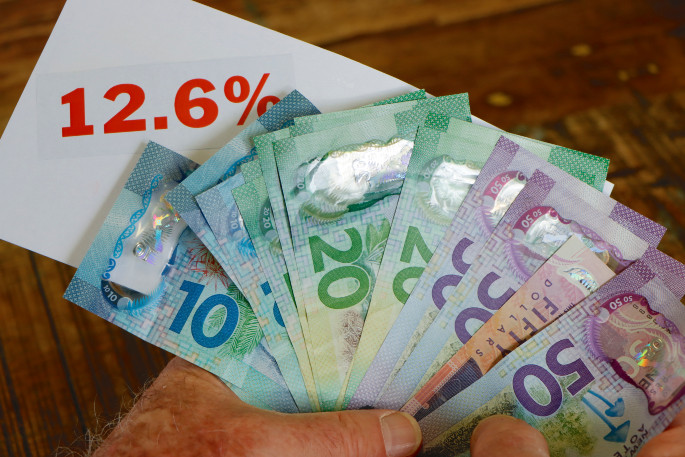 The Mayor of Tauranga Tenby Powell has delivered an impassioned message on ‘bold leadership’ while backing a substantial rates rise to cover for a ‘past abject lack of courage’ in driving the city forward.

He says it is time to stop being ‘rubbery-lipped about growth’ and drop the ‘I don’t want my sleeping little village to change’ tantrum.

The message came during a sometimes heated and passionate Tauranga City Council policy committee annual plan meeting where councillors arrived at a 12.6 per cent draft rates rise in support of $244 million of capital expenditure.

If the rise is adopted in the annual plan after public consultation, it could mean a median eight per cent increase or an extra four dollars a week for each residential householder.

The committee voted six-five in favour of the plan.

“Much of what needed to be paid for is historical,” says Tenby, pointing at past city administrations.

The plan was reached after three hours discussing the pressure the city’s finances were under from the need to make massive infrastructure investments without breaching the debt to revenue ratio. The committee has also signaled the need to work with regional and central government on solutions to funding and financing challenges.

Businesses will be consulted about paying a higher proportion, considering the need for investment in transportation and other projects supporting the local economy.

Mayor Tenby Powell says a long-term solution was collectively being sought with regional and national partners, but strong leadership and bold decision-making was required now.

“It’s time for us to grow up – this is our chance to stand up on behalf of current and future residents.

“People want to live here and to bring their businesses here and come here they will. Tauranga is a magnet city – not a walled medieval town.”

The vote came after the meeting heard Tauranga faced serious challenges if the average residential rates increase was restricted to the 3.9 per cent that councillors had previously asked staff to budget for.

The council executive instead recommended a budget with an average rates rise of between 12.6 per cent and 17.6 per cent be taken to the community for consideration.

It said the adage that ‘growth pays for growth’ was no longer true, partly because of long pay-back periods. This was backed by an Infrastructure New Zealand report that, nationally, it cost councils $50,000 to pay for the pipes and roads for every new house.

The meeting heard that the lack of housing and infrastructure in Tauranga was already holding back growth. Public consultation for the draft annual plan is expected to start on March 25.

The Larry & Tenby show is a sham. Imagine if Tenby had as his election by line " vote for me and enjoy a 12.6 % rates increase". Likewise Larry . Rumour has it that Tenby isn’t even a ratepayer so no wonder rates are no issue to him. Kelvin Clout promised rates of inflation plus 2% . As you would expect these people have no scruples and will say whatever it takes to get elected. It’s likely that these and others won’t be re elected so they’ll go for massive rates increases to fund their pet projects knowing that once on the gravy train it’s hard to get them off. As for Baldocks statements about ’sell your home if you can’t pay up’ that’s a fairly non Christian action considering most homeowners spend their lifetimes paying off their homes.

… thrown a tantrum about our City and its management, but I have expressed some criticism. (I hope it is fair; I try to be...) The priorities expressed in the article are mostly good, although the rubbish collection was working pretty well without Council interference. Infrastructure IS important and it does need finance. But maybe the range of "priorities" being addressed is more than can be dealt with, given the available funds. Why not focus on water (which no-one can argue about...), get the Government to pick up the roading, THEN look at what we can do about housing and see what the shortfall is between the money generated for new permits and what is actually needed. The proposed Rates increase is NOT "courageous leadership", it is just a few bob extra to cover the previous incompetence of management, which apparently is going to continue, "same old same old"...

How can it be historic Tenby?

How can you say much of what needs to be paid for is historic and then say it’s money you want to drive the city forward, well forward according to you? The biggest thing we want is decent roads but we don’t want out rates to go up 12% to pay for roads the Government is responsible for. We also shouldn’t be paying for infrastructure that is covered by fees on new houses and land. How about an actual list of projects and costs, not spin doctor words that impress only your followers. You also claimed connections in government to get what Tauranga needs.

"people want to bring their businesses here" - they should because then they can have residents subsidise them with TCC’s grossly unfair rates differential. They can bring their boats and utes and laugh at all the hard up homeowners and thank their pal Tenby Powell. Robin Hood in reverse.

I get the sense that this guy is just using Tauranga to promote himself above anything else. I sense the goal is to be National leader. Might be wrong. Just putting it out there.

The only tantrum is yours pal. You cannot stand disagreement and act all superior like you know best. Running a Council like you’re still in the Army. It must really hurt having thousands of people disagree and kick up a fuss when you’re just used to giving orders with no dissent. Get used to it sunshine because this is not the Army. Tick tock.

I’d like to know where all the funds that are currently received by council go - not a fancy coloured pie chart - how much in Staff wages? Average staff salary? Consultant fees ...and how much did it cost to repair the patch in the road outside the old Gilmours site - by the number of trucks there, the excavators ( a large one and a small one) the number of people on site wearing PPE (note I didn’t use the term workers - quite deliberately), the number of cones put out....thought it was going to be a major but lo and behold - so a price for that Mr Mayor please; and then if you can show fiscal responsibility maybe, just maybe more funds might be forthcoming but at the moment - you are kidding!

ex armed services it will be a total disaster, seen it happen in other industry, they are not the people to deal with the public. this will be only the start, do as i say and ask no question’s, mark my words

This rise is a result of a lack of long term planning and reflects a leadership crisis. Keeping rates artificially low to present a rosy picture ends up in someone having to have the courage to say it is and b mop up the mess. People bitch and whine about their rates, but they are happy to pay for sky and Netflix, many people pay more in utility charges than they do for their rates. When you neglect infrastructure, don’t charge enough development levies, etc this is the result. Comments like people will sell rentals making a further shortage are absurd, when a house is sold it doesn’t go to another place, people will live in it, they could be ex renters or another landlord may buy it...

Cant live in a place like this for nothing.

We have some of the highest rates in the country and a heavily indebted council. So it’s bad news that the growth so lauded has put us in the position of being behind in infrastructure. Seems it’s the case with the whole country with people flocking here to live and putting everything under strain. So it seems no one is controlling anything and the councils big idea is to raise more money from the ratepayers many who will then apply for rates relief. The Mayors rhetoric maybe somewhat accurate but bitter to the taste . I suspect that this council will not fair any better than previous councils as they don’t really control much either, some of who are still with us.

As I drive down Hewletts Road, or smell the stink from the Chapel St sewage treatment station, see all the old wooden power poles, the crumbling kerbsides, and a host of other infrastructure projects that are sorely needed, I wonder about the mentality of those who do not want the work to be done. Our children will surely curse us for our laziness, lack of pride and vision as they try and live in the mess we left behind for them. For those who are asset rich but cash poor, learn to adjust. We all have to get used to a changing world. There can be no other way.

Totally out of touch

Despite all the fancy words like infrastructure and Council’s ability to grow, this is an appallingly inappropriate proposed rates hike. This can only be instigated by people who it would not matter a jot to personally. Theses same type of people are the ones who suggested that the TECT refunds go to charities. To make it clear they are absolutely out of touch with the average household budget. Rents will go up and people will sell rental properties so there will be a further shortage of rental accomodation, and so it goes on.

Well Mr Powell iv"e got news for you. If you have a few million in the bank $4 a week is nothing. That is replaced in 5 min by interest. But for the rest of us $4 a week is a lot. For a lot of people that is one less food product on the table. You try living on $600 a week. You would even have to go without your latte

Tenby won’t be standing for re-election in the next local government elections. Well, lets put it this way - he needn’t bother.