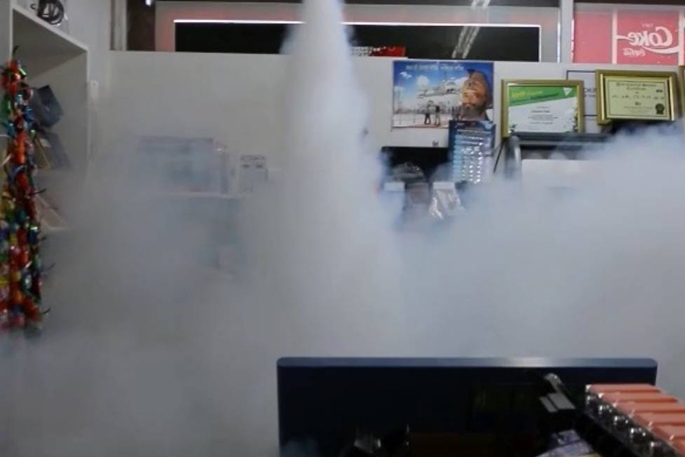 How a fog cannon looks from the offender's point of view. Photo: Stuff.

A crime prevention initiative to improve the safety of workers in small businesses like dairies, liquor stores and petrol stations is to be rolled out to hundreds of more locations.

Bay of Plenty small businesses have had 61 fog cannons installed to date.

“We are almost doubling the number of fog cannons to be installed thanks to extra funding,” Stuart says.

“An estimated 470 extra retail premises will be eligible. Fog cannons have already been installed in 523 locations.

“Fog cannons have been activated by workers in 29 businesses and in all cases there were no injuries to staff and minimal property loss for business owners. The fog cannon scheme has a marked impact on the safety of workers in retail premises.”

Commercial aggravated robberies are at their lowest level in five years, says Stuart.

“There was a 21 per cent reduction in aggravated robberies during 2019, compared to the previous year. Since April 2017 Police have identified and dealt with 1,277 offenders.”

Stuart says many robberies are fuelled by a desire for a quick buck to feed a drug habit.

“Wastewater analysis indicates that methamphetamine use has fallen by 17 per cent in the first full year of nationwide testing. It’s still early days but it’s headed in the right direction.

“Extra Police resources have also enabled a new focus on aggravated robberies. This includes more detectives, more staff to work with youth, and Police who work with small business owners and industry groups.”

82 per cent of the fog cannons have been installed in suprettes and dairies. Liquor stores have received three per cent, and petrol stations 15 per cent.

Almost half the fog cannons currently installed are in the Police districts of Counties Manukau, Waikato, and Bay of Plenty, says Stuart.

“Fog cannons emit a non-toxic cloud of vapour and a high-pitched noise to deter offenders and minimise the risk of violence to workers. They effectively create a barrier and a no-go zone that confuses the offender and allows workers to escape.

“Not all businesses are eligible. Owners apply to Police who do an assessment based on risk, such as whether they have been robbed in the past and the number of Police callouts to incidents within 100 metres of the shop.”