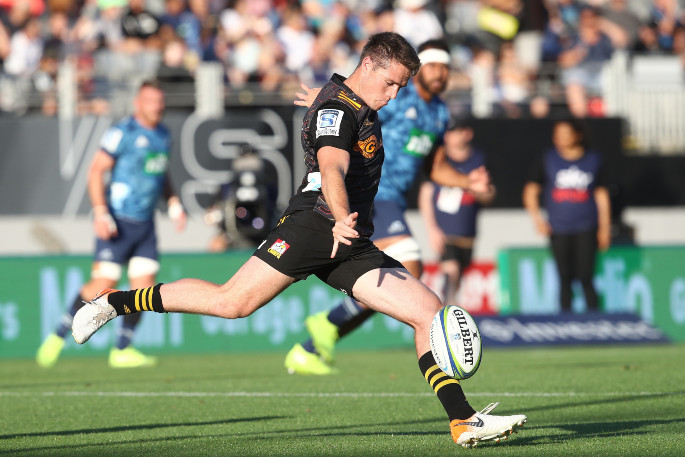 How young players bounce back from injury is always a true test of their character.

The result was a broken jaw and a lengthy rehab back to contact training eating meals through a straw.

But despite the drama he went though it did not dent Kaleb’s confidence or his chances of making the Chiefs squad for the 2020 Super Rugby season.

The former Rotorua Boys’ First XV and NZ Under-20 rep was delighted to be selected by coach Warren Gatland as a first-five who can play fullback in the squad alongside former All Blacks Aaron Cruden and Damian McKenzie.

Coach Gatland has shown faith in Kaleb by starting him in two of the four games played so far with early signs the step up to Super Rugby has been no problem.

“Obviously I would like to play as much as I can but I suppose this year is more about learning and putting those learnings into action so I am more prepared next year,” says Kaleb.

There have been some obvious differences stepping up from Mitre 10 Cup level.

“The trainings have been more physical and it is a lot higher intensity as well I guess. The main thing is the amount of training you do to prepare for a game compared to a lower level is quite different.

“The games are definitely faster and there are lots more big bodies running around the paddock. Everyone knows what they are doing at Super Rugby. It is that much harder to do things on attack because everyone is good at defending.”

Training every day with players of the calibre of Cruden and McKenzie has been a positive benefit for Kaleb.

“It is really good. Cruds is always there to help lend a hand and if you ever need help with something he will help you out. The same goes for Damo. They are both really clever and give you a good insight into what you should do in certain situations. Yes, it is really good to learn off those two.”

Coach Gatland is renowned for expecting high standards from his players on and off the field. The no-nonsense former hooker who played 140 games for Waikato has made a positive impression on Kaleb.

“Yeah Gats is really supportive and good to talk to even with stuff that is not to do with rugby. He is a real family man and that’s really cool about him. Yeah he is just a real nice dude.”

The Chiefs have won three and lost one of their opening four games. They are in action this Friday against the Waratahs in Wollongong. Kick-off 9.15pm.