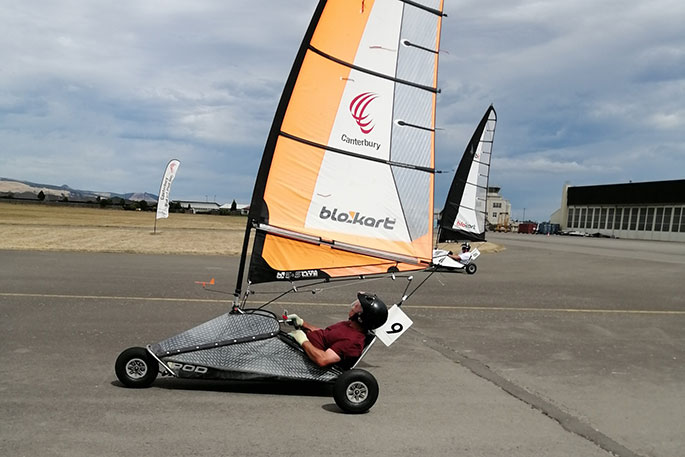 Trevor French from Whakamarama in action at the NZ Open at Wigram. Supplied photos.

Whakamarama’s Trevor French had a podium finish after 21 races.

“The Nelson track has a loose metal surface and is one of the country’s shorter tracks which takes a while to adjust to,” says a Bay Blokart Club spokesperson.

“On Day 1, the wind gradually built from seven knots to a roaring 20 knots, which saw sailors scrambling to change to their smaller sails.

“Several sailors lost control in the gusty conditions and hit the fences or spun out.”

Day 2’s conditions were much calmer and, while the sailing was enjoyable, it was not as spectacular as the previous day. 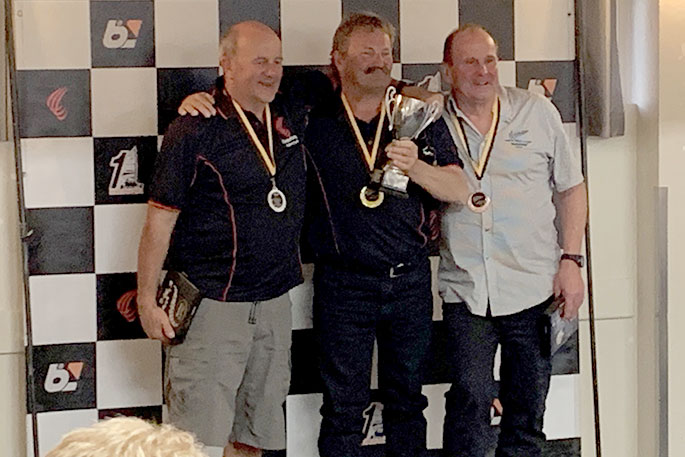 After 21 races, the Bay’s Trevor French (Whakamarama), sailing in the Super Heavyweight division, was the club’s only sailor to make the podium finishing in second place just 4 points behind the winner.

“This facility has a large sealed area in front of the hangars and a 600m long taxiway leading from the apron.”

For the first two days, the wind was light to medium and from a consistent direction. All the Bay sailors had their good and bad races.

By Day 3, the wind was dropping out and changing direction and racing was halted for 3-4 hours.

In late afternoon, a southerly wind sprang up accompanied by rain and hail and the temperature plummeted from 20 degrees to 8. Two rounds of racing were run in these conditions.

“Unfortunately there was no wind on Day 4 and the series was completed on Day 3’s standings after 14 races in each division.

“Bay Blokart Club sailors did very well with Deb Davidson (Minden) being crowned the New Zealand Lightweight champion for 2020 (a repeat of her title in 2019), and Peter McCrea (Omokoroa) gaining third place in the Super Heavyweight division.” 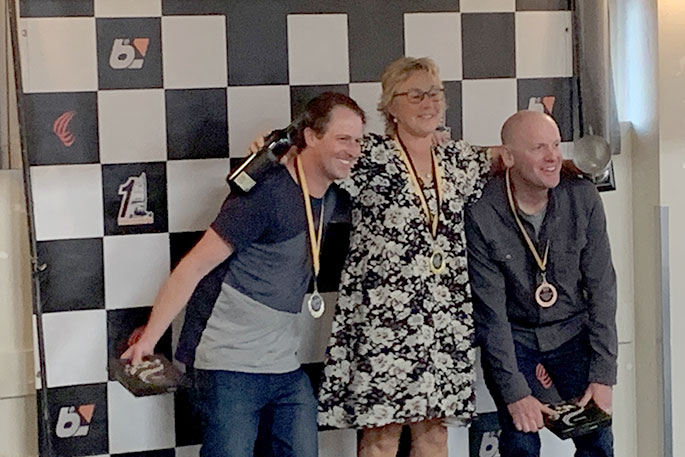 Deb Davidson on the podium in first place lightweight division at the NZ Open at Wigram.

The 2020 World Blokart Championship is being held over five days at the Manawatu Blokart Club’s track at Sanson and RNZAF Base Ohakea this year from October 21 to 26.

The last time the World Championship was held in New Zealand was in 2008 at the Bay club’s former track in Papamoa.

The Bay Blokart Club sails at the carpark at the far end of the Trustpower Stadium, 81 Truman Lane, Te Maunga most Sundays throughout the year.

For information about the club, email bayblokartclub@outlook.com 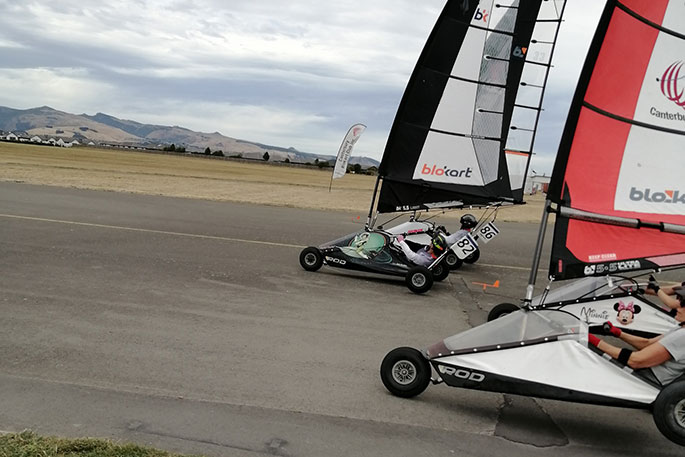 Deb Davidson from Minden (black sail) leading a lightweight division race at the NZ Open at Wigram with Dee McCrea from Omokoroa (red sail foreground) also in the hunt.