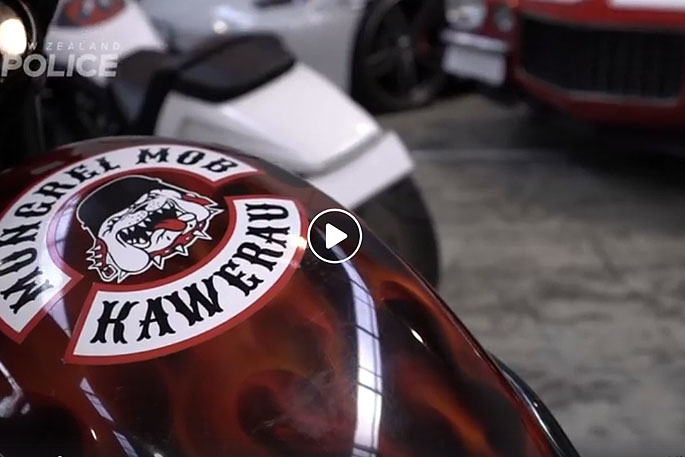 Police have seized a number of assest from alleged criminals in 2019. Photo and video by New Zealand Police.

The Police Asset Recovery Unit made an estimated $101 million dent in criminal activity in 2019.

The unit, which is responsible for restraining assets accumulated through the proceeds of crime, restrained 491 assets last year, including bank accounts, real estate, cash, vehicles, e-currency, jewellery and a host of other items.

About 80 per cent of all restrained assets stem from drugs, gangs and organised crime.

“Organised crime is all about money, and we’re intensifying our focus on the proceeds of that crime as part of our strategy to combat it,” says Police Commissioner Mike Bush.

“By focusing on the proceeds, we deprive criminals of their assets and therefore their influence.

“These efforts are about protecting vulnerable people, removing the incentive to join gangs in the first place, and keeping the wider community safe.

“The vast majority of New Zealanders are rewarded through honest labour but then there are those who seek to gain from victimising and hurting others, and those are the ones we target.”

In early January the search of a Feilding property revealed a sophisticated cannabis cultivation operation with more than 1100 cannabis plants.

Two people were arrested and the property, valued at $1.6 million, was restrained along with $840,000 cash, vehicles and farm-related equipment.

This operation, like many others around the country last year, resulted in the recovery of a significant amount of cash.

Detective Inspector Craig Hamilton, officer in charge of the Asset Recovery Unit, says anti-money laundering laws are making it increasingly difficult for offenders to get cash into the banking system.

“It’s not unusual to find significant sums hidden under beds or couches, in the lining of walls, or in holes in the ground.

“The ARU is increasing its capability and capacity with the recent addition of extra staff, and there are more to come.

“The 2019 estimated value of restrained assets represents a 65 per cent increase on the 2018 figure of $61 million.

“Money derived from the sale of forfeited property is being reinvested across a range of initiatives to support the safety and wellbeing of communities, including drug addiction services.

“This is very rewarding for our staff who are responding to so much methamphetamine-related crime every day. It’s an insidious drug causing serious harm in our communities.

“We urge anyone with information about this type of activity to come forward — the more we know, the more effective we can be at stopping criminals unfairly profiting at the expense of others.”

“And to those out there making money from crime, expect to become better acquainted with us."

Anything that can undermine or break the illegal activity of gangs is very welcome. Cops are doing a very good job and we need to support them.

Trust a/c are responsible for hiding illicit funds.These need to be addressed the same way.

Police getting on with the job with the gangs and the opposition silent on this.