LIVE: Coronavirus update from the MOH 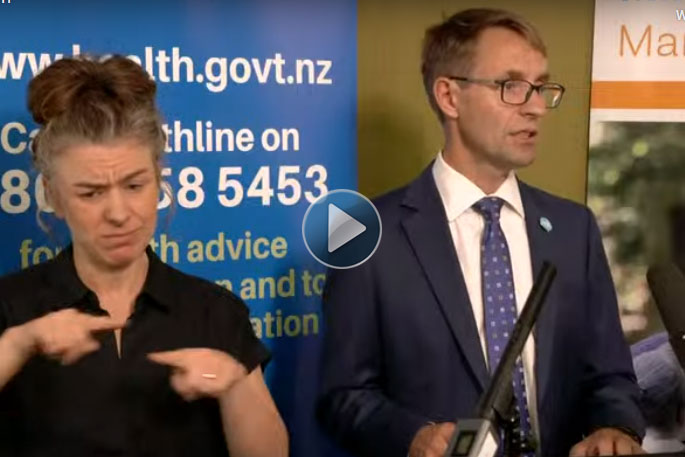 Health authorities have assured New Zealanders there is no rationing of testing for the Covid-19 coronavirus, with capacity to test hundreds of patients a day.

He says there have been 155 tests carried out, with just one returning a positive result, and there were 31 tests currently underway.

He says one of the two tests that he had mentioned yesterday had come back negative, and authorities were now waiting on the results from the second.

"We still assess our likelihood of a widespread community outbreak is low."

He says all the testing of New Zealanders for Covid-19 was being done in New Zealand.

He says information is being collected at the border from those people coming from those places of concern, including South Korea and northern Italy.

"We are particularly concerned about Iran ... and anyone who came in from Iran in the last 14 days we are strongly suggesting they go into isolation."

He says New Zealand would also be upping the presence of health staff at the border, not to do screening but to improve the information being offered.

Healthline had more than 1600 calls yesterday, the biggest volume it has faced so far.

Ashley pleads with people to be patient and judicious in their calling to make sure that the people who needed to access it could do so.

He advises people making travel plans to use the Safetravel website.

"This is a trust arrangement, but ... everybody here is very clear that self-isolation is an expectation."

Dr Michelle Balm, clinical leader for infection services at Capital & Coast DHB, says while they had been asked about possible rationing of testing, there was capacity to test more than 500 patients a day through ESR and several large laboratories.

"There is easily the capacity for testing and this can also be ramped up over the next few weeks."

Michelle says if people are worried they are infected, they should not front up at an emergency department or a primary care provider, and should call the healthline instead.

"We know that's it's not a good idea to test asymptomatic people on the current evidence available. It is likely to give a false sense of security."

So far, only one case has been confirmed in New Zealand. The woman had returned from Iran via Bali and was recovering in hospital in Auckland.

Total infections worldwide have topped 90,000, with deaths now over 3100. Nearly all cases and deaths have been in China but the numbers in Iran, Italy and South Korea have continued to grow.

Prime Minister Jacinda Ardern yesterday announced people travelling via Italy and South Korea would have to go into isolation for two weeks upon arrival.

Visitors travelling from mainland China and Iran are barred from entering the country, while citizens and permanent residents from those places are being asked to go into isolation.