Connolly may be days away from clinching title 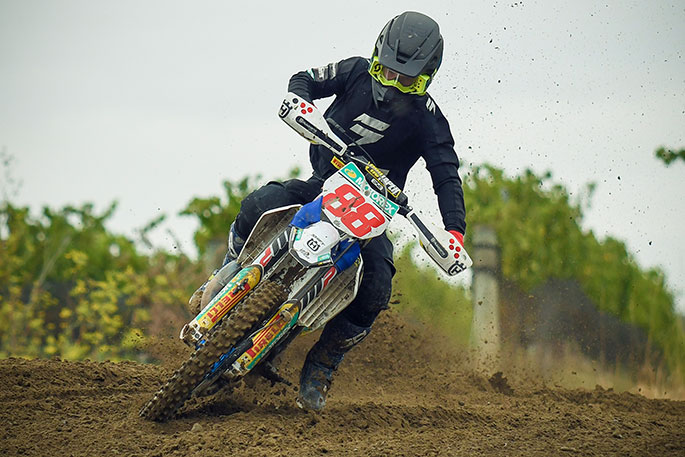 Tauranga's Brodie Connolly (LMC Racing Team Husqvarna TC125) has a Hawke's Bay vineyard as his backdrop while racing to a hat-trick of wins on Sunday. Photo by Andy McGechan, BikesportNZ.com

Bay of Plenty's Brodie Connolly has one hand already on the national 125cc motocross crown for 2020.

With eight wins from nine starts so far in the New Zealand Motocross Championships – three of them scored at the third round of four at Fernhill, near Hastings, on Sunday – it's a fairly safe bet to assume that the Tauranga teenager will wrap up his first senior title later this month.

With just the fourth and final round of the series to come, at Taupo in two weeks' time, Connolly (LMC Racing Team Husqvarna TC125) has points worth two race wins up his sleeve and, with only three more races at Taupo's final round on March 15 remaining to complete the series, there is absolutely no pressure on the 16-year-old.

Connolly's hat-trick of wins at Fernhill on Sunday means he has extended his championships lead to a whopping 64 points over his nearest challenger, Christchurch's Marshall Phillips, and this means Connolly will most likely clinch the title after the first 125cc race in Taupo.

"I have a good, comfortable lead and it's all going to plan," says Connolly.

"It's just a matter of staying consistent and so hopefully I have no problems and can wrap it up at Taupo."

He was involved in a collision with another rider at the previous round in Rotorua and recovered from last to finish that race in runner-up position, the only blight on an otherwise flawless campaign so far.

Meanwhile, there was an 11-point turnaround at the top of the MX1 class at Fernhill, visiting Australian Kirk Gibbs turning a six-point deficit into a five point buffer over Mount Maunganui's defending national MX1 champion Cody Cooper.

It was a similar story too in the MX2 (250cc) class, with Taupo's Maximus Purvis turning an eight-point deficit into a four-point advantage over Mount Maunganui's Josiah Natzke.

There is no doubt the racing will be hot for the MX1 and MX2 class riders at Taupo's final round, but for the 125cc class it's just a matter of working out which rider will be runner-up.

Tauranga's Madoc Dixon is just one point adrift of Phillips, despite Dixon suffering two non-finishes at the previous round in Rotorua, and Auckland's Cobie Bourke is only another four points further back after he too suffered a non finish earlier in his campaign.