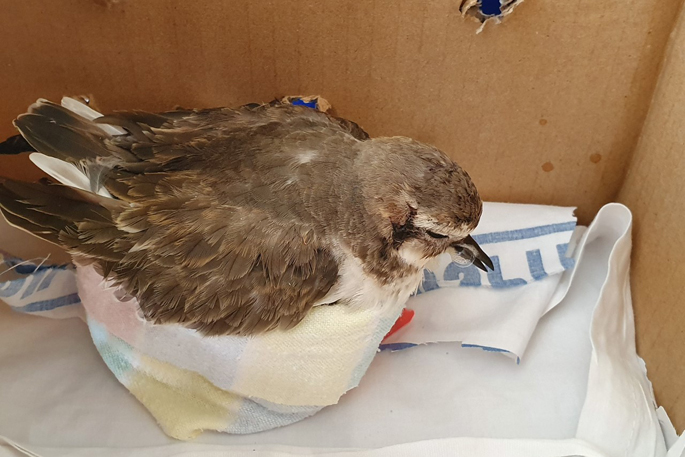 A banded dotterel being rehabilitated. Photo: Department of Conservation.

Hot summer temperatures are contributing to a large-scale botulism outbreak, a suspected algal bloom and the death of fish trapped in canals in the lower Piako River and Firth of Thames.

“We are seeing a lot of dead fish in the canals, and birds affected by botulism around the lower Piako River. This is a major concern for the Department of Conservation,” says DOC Hauraki senior biodiversity ranger Mailee Stanbury.

Mailee says two internationally significant RAMSAR wetlands - Kopuatai Peat Wetland and the Firth of Thames mudflats - are being put at risk by these two outbreaks.

“The Firth is home to a number of internationally significant migratory wader birds whose numbers are in decline due to worldwide habitat loss – and now, with the combination of the botulism outbreak and the algal bloom, we have a very worrying situation emerging,” she says.

Since January, an outbreak of botulism has resulted in more than 3500 dead birds collected by volunteers involved in a multi-agency clean-up led by Fish & Game New Zealand.

Six teams of hunter volunteers are working around the Firth on an almost daily basis to remove dead birds and minimise the impact of the outbreak.

The local duck population is bearing the brunt of this outbreak, but protected species including shags, spoonbills, herons, harriers, stilts, banded dotterels, and Caspian terns are also affected.

Meanwhile, a Department of Conservation-led response to a suspected toxic algal bloom outbreak affecting birds has seen the rehabilitation and successful release of more than two dozen shorebirds found at Pukorokoro Miranda in the Firth of Thames over the last two weeks.

“We measured temperatures of more than 29 degrees in some of these cut-off drains. That’s extreme and much higher than flowing drains and rivers nearby. The fact some of our most pollution-tolerant species such as eels are now dying en-masse gives an indication just how bad the situation is there now,” he says.

“It would be unfair to blame these events on temperature alone, however, triggers for botulism and the algal bloom outbreak include excessive nutrient loads in streams and canals feeding into the Firth."

“There is no quick fix and we need all the associated agencies, land users and industries creating and managing discharges to come on board,” Mailee says.