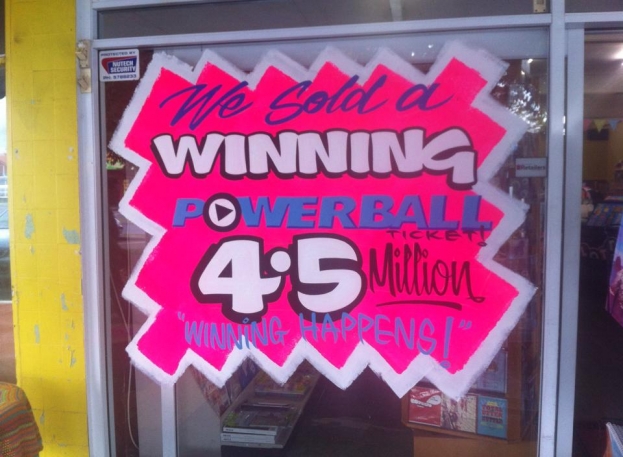 Greerton Village must be one of the luckiest places to shop in the country, with their lucky little Lotto shop again putting them on the map.

Greerton Lotto sold a Lotto First Division ticket in Saturday night’s draw, resulting in $111,111 win for one of their customers.

But the winning didn’t stop there.

Following Saturday night’s draw, two more Lotto players who bought their tickets from Greerton Lotto will be enjoying a boost to their bank account after each winning $26,117 with Lotto Second Division.

All up, since Lotto started, Greerton Lotto have given away more than $18 million in prize money and sold more than 20 first division winning tickets.

Greerton Lotto was named the luckiest Lotto store for 2015 when the shop sold not one but two Powerball First Division tickets during the year, as well as a Lotto First Division winning ticket, which came to a total of $10 million in First Division prizes won from the store.

A whopping 2.6 million tickets were sold for the $50 million draw on Saturday. Sales peaked between 6pm and 7pm on Saturday night, with 2,500 tickets being sold every minute.

“Demand for tickets was unprecedented as Kiwis dreamed of winning big,” says Lotto NZ Chief Executive, Chris Lyman. “All up, there were over 2.6 million tickets entered into the draw. At our busiest time on Saturday, between 6pm and 7pm, we were selling over 2,500 tickets a minute.

“I’d like to thank our players, who really got into the spirit of the game. There was a lot of happy banter in queues around the country as complete strangers chatted what they would do if they won,” says Chris.

“I’d also like to thank our retailers, who all did an absolutely amazing job during the week.”

A further three players won $333,333 with Strike Must Be Won which jackpotted to $1 million for the draw. Second division was won by 39 players, each taking home $26,117. Of these eight players also won Powerball Second Division, taking their total winnings to $35,771.

“We are thrilled for all of our winners – people from all over New Zealand will be celebrating following the draw,” says Chris.

As two Kiwis woke up to news that they had just won $25.1 million each following Saturday night’s Powerball Must Be Won draw, Lotto NZ wants to thank its players.

“As winners around the country are celebrating following the $50 million draw, community groups around New Zealand will also be seeing the benefit,” says Chris.

“Lotto NZ exists to generate funding for Kiwi communities – it’s why we’re here. With 100 per cent of Lotto NZ’s profits helping support over 3,000 good causes around the country, every ticket bought helps make a real difference in Kiwi communities.”

When Greerton Lotto sold a winning Powerball ticket back in February 2015, the owner posted to the window a celebratory sign saying ‘Winning happens!’

Well it certainly does.