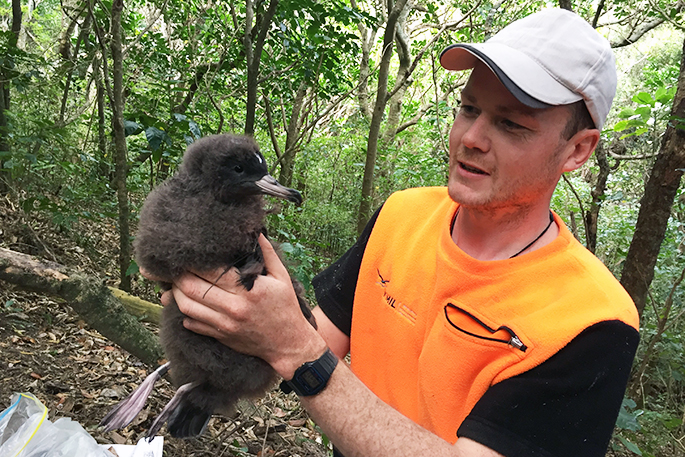 Patrick Crowe isn’t quite on first name basis with Ohinau Island’s flesh-footed shearwater birds – but he does know which ones will give him a peck.

Patrick, aged 30, is an ecologist with Wildlife Management International, and may be the most frequent visitor to Ohinau Island, a few kilometres of the northeastern tip of the Coromandel Peninsula and predator free since 2005.

It’s a project managed under the Conservation Services Programme, and Patrick has been visiting Ohinau since 2016, doing burrow monitoring annually, specifically for flesh-footed shearwaters. Flesh-footed shearwaters are a nationally vulnerable species prone to chasing baited hooks on long-line vessels or becoming entangled in fishing boat nets.

He’s just returned from his most recent summer foray onto the uninhabited island, where he camped for three weeks to carry out shearwater burrow checks and banding of adult birds to determine the survival rate of individuals returning to the Ohinau colonies.

He’ll return in April and May to assess how many chicks have emerged from the eggs and are ready to fledge, and carry out more banding to find out how many juveniles will survive, and when the younger birds will make their first return to the island. Chicks banded before they fledge won’t return to any kind of land for up to six years, before returning to the same location they came from.

Patrick says although shearwaters are generally pretty calm during the burrow investigations, the birds live up to their “flesh eater” nickname when it comes to the banding, which continues during his April-May visit.

“They have a really powerful long sharp bill, and sharp claws…so we wear pretty thick leather gloves for the banding,” says Patrick.

“I’ve got a handle on how to control the birds. I can remember certain birds – they might be quite grumpy, squawk a lot … and some others are an absolute delight to handle.”

This year’s forays to Ohinau have been particularly special because the birds are being GPS tracked. Patrick’s February stay has seen him attaching a sealed GPS chip to the back feathers of birds, and tracking via GPS determines the distances the birds travel while feeding, and also informing mitigation methods used by the fishing industry. One bird tracked in January travelled 8000km in 14 days.

Shearwaters are what’s called an “annual breeder” – couples usually mate for life but only have one egg and chick per year. If the egg or chick doesn’t make it, that’s it, and the couple won’t have another egg for the rest of the year.

“We’ve found with the burrow monitoring they pair up, and breed year after year with the same partner. There are very rare circumstances when we might find a divorce!” says Patrick.

The birds breed on 15 islands around northern NZ. Ohinau has one of the biggest populations with an estimated 4000 breeding pairs, including two new nesting colonies on the island.

From the December-January trip, the birds’ breeding success can be determined – the number of eggs laid vs number of chicks that fledge in May. The signs are encouraging, with numbers generally increasing on Ohinau.

Patrick’s January stint was 24 days, and returned for a further 17 days in February. He has to take everything he needs including all his food and water. A sheltered bay for swimming makes up for lack of showers. The project is jointly funded by DOC and from a levy collected from the New Zealand fishing industry.

The local DOC District Office at Whitianga assists with quarantine of items taken on to the island and other logistical support. The results of Patrick’s research are published on DOC’s website.

Graeme Taylor, DOC’s Principal Science Advisor Marine Species and Threats, says the work being done on Ohinau Island is vital to understanding of the demographics of the flesh-footed shearwater population – one of the species most at-risk from fishing industry bycatch.

“The ongoing research and monitoring occurring on Ohinau will give us vital data to inform some robust conclusions about the population trends of this species, its breeding patterns – and whether birds from different colonies mix at sea," says Graeme.

“The WMIL team has been doing a great job with this species.”