The gift of faith 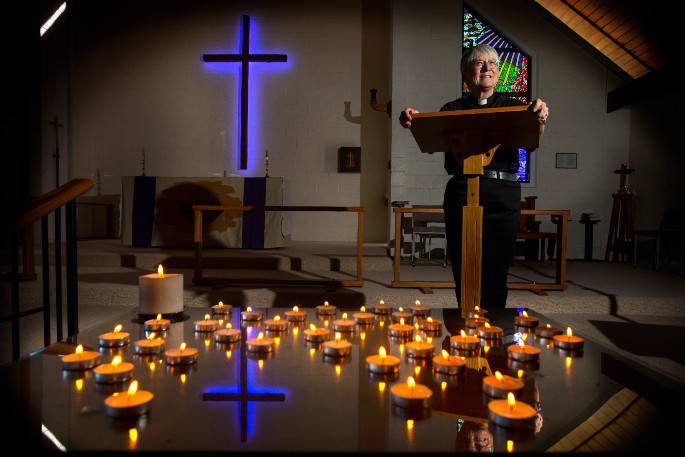 She has an impressive pedigree.

In a previous, secular incarnation, Sue Beverly was chief manager of the Bank of England’s UK foreign currency reserves.

“Me and my team were responsible for investing about $US56 billion of the country’s money in foreign currency.”

Then for seven years she was the bank’s presence in Wales – painting a picture of the economy through the eyes of business and reporting to the monetary policy committee which determined interest rates.

“I needed to know everybody who needed to be known at a senior business level in Wales.”

So about 600 contacts at a chief executive finance director level. That too, heady stuff.

But today, you might catch Sue Beverly cycling around Tauranga’s Waikareao Estuary in her dog collar, and in the sun – turning a ten minute walk to the office into a blissful and leisurely nine kilometre ride. Work nowadays is the vicar’s office at St John’s Anglican Church at the top of Bureta Road in Otumoetai.

She is the new vicar.

“A great place, a wonderful worship space with stain glass windows, an immediate sense of comfort and well-being and connection – how do you describe how you connect with somewhere? We just feel at home here.”

These are now settling times, rebuilding times and encouraging times at the church.

“Some very faithful loyal priests have been looking after the parish,” says Reverend Beverly BV.

But when the church needed a new vicar it had to go abroad. And it went head-hunting.

They found the Reverend Sue Beverly helping with a parish in Malvern, Worcestershire, in the West Midlands of the UK.

“I was invited to apply,” says the vicar.

“Me at my desk in Malvern and them around a table.”

They skyped again and yet again, then the Bishop offered her the job. And Sue accepted. Amen.

It capped an on-going relationship Sue and husband John has with New Zealand. They first came in 1997 and have been back several times.

They spent five weeks tripping around the South Island last year and have probably seen more of New Zealand than a lot of New Zealanders.

Another great odyssey for Sue Beverley has been her faith.

“I haven’t always been a Christian. I came to faith much later, in my fifties. And it wasn’t a blinding flash.”

It just dawned on her that she had been given the “gift of faith”.

“And I think part of it was when I stopped thinking I needed to be able to explain it all.”

She says you can’t argue anyone into faith.

“It’s not something you can convince someone of by intellectual argument. It’s an experience.”

Then someone remarked they could see Sue as a priest. So she went through the selection process, started training at a theological college, was ordained and got a degree in practical theology. That would eventually lead her up Bureta Road to St Johns, a church built in the 1960s. And therein lies an interesting difference.

By comparison, New Zealand has only started growing its history.

“You could say the walls of those English churches are soaked with prayer because so many people have worshipped there.”

But in terms of places where people worship, then different churches have different atmospheres “and St Johns has a lovely atmosphere”.

While the Anglican Church has struggled with the controversy regarding homosexuality in the church, Reverend Sue Beverly has set her own line in the sand.

“I firmly believe God loves everybody, irrespective of who they are, where they come from.

“We would describe ourselves as an inclusive church. Our intention is to make everyone welcome because we believe that how we behave is an indication of the sort of God we believe in. So we believe in a God who cares for everybody and therefore we must care for everybody.”

The woman who spent 16 years in Wales can do what only a third of that nation’s three million people can do. And that’s speak their own language.

“You just have to remember Ys and Ws are vowels.”