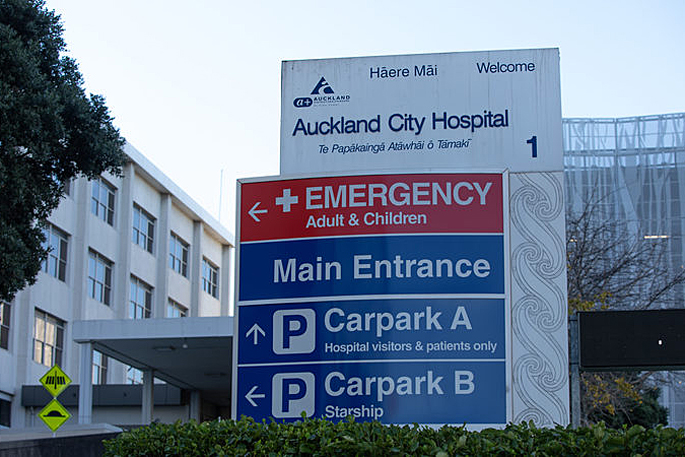 The person is being treated in Auckland Hospital. Photo: RNZ / Dan Cook

The person was in their sixties, and was a citizen of New Zealand who had recently travelled from Iran via Bali, she says.

They were in an improving condition in isolation in Auckland hospital after arriving on Thursday night.

Director-General of Health Ashley Bloomfield says the person arrived this week from Iran, where the virus had been rapidly spreading.

He earlier said five people were being tested for the virus in New Zealand, but only this person fit the definition of a suspected case.

He says 130 tests for Covid-19 had been done this month, all of them negative except this one.

In a statement, the Ministry of Health say they received the test results about 4.15pm today.

The ministry say the patient was being treated in Auckland City Hospital in an improving condition in isolation.

The chances of community outbreak remained low, the ministry says, and public risk from the new infection was being well managed because of the public messaging, awareness of Covid-19 and public health response to managing cases and contacts.

I hope you’re correct Scott. But, just suppose you are not? If you had to make a decision that could affect many people’s lives and families, would it really be so hard to cut the risk? The reason the Government is under pressure is because of profit and money, not because we don’t want people to be sick. You are right, and many thousands of people every year get the ’flu and some of them die. But the strains of ’flu we vaccinate against are well-known and even the annual mutations are still well understood. COVID-19 is different. We simply DON’T know enough about it to be playing fast and loose with the population of our country. Responsible Government should act responsibly.

It’s the flu not a chemical warfare agent. A less virulent strain than H1N1. Social media , mis information and mass hysteria. Oh and a respiratory mask is to stop spreading germs not to prevent catching them. The world has truely has gone mad. According to CDC (Centers for Disease Control and Prevention) a US federal agency estimates that influenza was associated with more than 35.5 million illnesses, more than 16.5 million medical visits, 490,600 hospitalizations, and 34,200 deaths during the 2018–2019 influenza season.Jan 8, 2020. That’s just the US alone. Covid-19 is another flu. Who bothered to get a flu jab last winter ? Just saying...

the pressure for profit will override the common sense demanded by the situation. We don’t know nearly enough about this virus, its incubation period, how it is transmitted, what agents is it susceptible to, what proper precautions to take, just a bunch of question marks. So, we err on the side of caution and cut connections to known sources. Wise and necessary. Except that commerce needs spare parts, and the Universities need students and the tourist industry needs clients, and we all expect to be able to buy goods in our stores when we need to... So the pressure mounts to "decide" the threat has passed, let’s get back to normal... And so our whole way of life is disrupted and our population is decimated, because we had no patience. Lyrch is right.

Yet another overconfident government and health system underestimating how virulent covid-19 really is?! Let’s hope and pray that this government has the insight to take extraordinary measures to prevent this virus from taking a foothold, as they have only on shot to get it right.