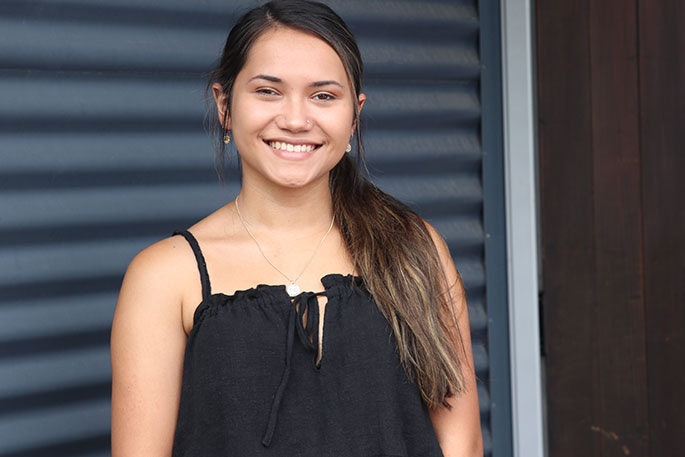 Britney Moore received three scholarships to help with her law studies at the University of Waikato in Tauranga. Supplied photo.

It’s been a week of ‘firsts’ for new University of Waikato law student, Britney Moore.

She moved cities, settled into her first flat, experienced her first Orientation Week and is preparing for her first class at Waikato’s new Tauranga CBD campus.

Britney, of Ngāti Porou and Te Aitanga-A-Māhaki descent, was born and raised in Gisborne by her single mum and is the first in her family to attend university.

She credits her mum, Megan, for instilling the importance of education, despite not finishing high school herself.

“Mum is my greatest supporter and has always pushed me to go to uni because she never did,” says Britney.

While she’d already made her mind up to attend The University of Waikato, Britney says it was a dream come true when she found out she’d been awarded three scholarships, worth a total of $12,000, to help her on her way.

“I still can’t get my head around it. I’m beyond words… I haven’t ever had something this good happen to me.”

Britney is the first recipient of the Acorn Foundation Beverly Perszyk Scholarship, and received a Tauranga Campus First-in-Family Scholarship from the Tauranga Tertiary Campus Charitable Trust, plus a Mayfair Court University of Waikato Residential Scholarship which will cover most of her first-year accommodation costs.

Last Thursday, Britney attended her first formal event at the university when she joined twenty other Waikato students to receive scholarships generously donated by the Tauranga Tertiary Campus Charitable Trust and Acorn Foundation.

She was thrilled to have her mum and younger sister Grace by her side, especially since it was touch and go whether the trio would make it to the event at all.

Megan says the university went above and beyond to find a solution.

“When Waikato staff found out that Britney would miss the prize giving, they arranged for me and Grace to stay in a Mayfair Court apartment next door to Britney’s at no cost.

"Having that extra time with my girl and getting to celebrate her scholarship success are memories that will stay with me, especially when I’m back in Gisborne missing her!”

Emotions ran high at the scholarship presentation when Britney met Associate Professor Ken Perszyk, Acting Director of the Tauranga campus, who set up the Beverly Perszyk Scholarship in honour of his late mother.

“It was incredible meeting Professor Perszyk and hearing that his mother, like mine, went straight into work from high school but was passionate about the importance of tertiary education. I’m very grateful to be the first Waikato student in Tauranga to benefit from this scholarship.”

The former Gisborne Girls’ High School student says her choice to pursue a study path in law was influenced by teachers who encouraged her to aim high.

While she didn’t get involved in extracurricular activities like some of her peers, Britney’s part-time job at the local fish ‘n chips shop didn’t just help out with the family finances but became the catalyst for her to work towards a career in family law.

“I’ve seen first-hand women and children come in with cuts and bruises, clearly victims of abuse, and while it was heart-breaking it lit a spark for me to want to help, make a change in the lives of innocent people and give them a voice,” says Britney.

Britney chose The University of Waikato to study law following a visit to another university.

“I didn’t find the other uni particularly friendly or welcoming so I begged mum to take me to Waikato’s Open Day to check out my options.”

Blown-away by the welcoming vibe of the new campus and the friendly staff, Britney says a meeting with law tutor Mary-Rose Russell sealed the deal.

“She was so informative, easy to relate to, and really opened my eyes to the many avenues you can take with law and the opportunities they can lead to. The smaller class sizes and one-on-one time with tutors sold me on the Tauranga campus and mum was happy that it’s an easier drive from Gisborne so she can visit more often.”

Now Britney is ready to focus her attention on her studies that kick off next week.

“I am determined to succeed in gaining a university qualification and be a role model for my younger sister, my whānau and other young people in Gisborne,” she says.

“My goal is to one day be able to give back to my community and stand proud as a young Māori woman and future New Zealand lawyer.”