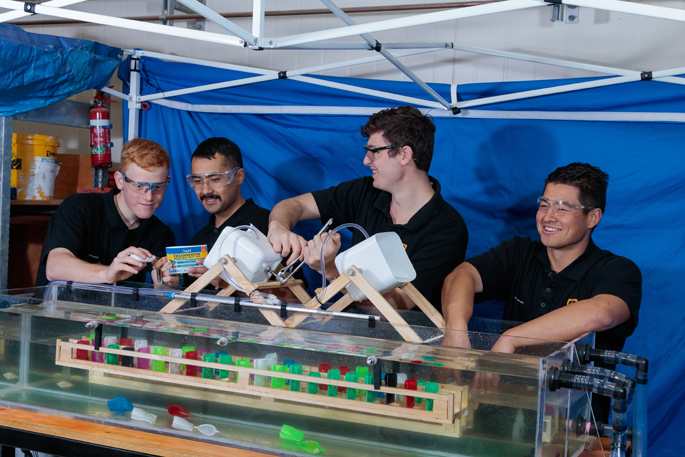 Two teams of Engineering students from the University of Waikato have been named as finalists in the Callaghan Innovation C-Prize, winning $10,000 towards their projects.

The C-Prize is a competition that seeks to push the boundaries of what’s possible through technology, and this year they were looking for teams with world-leading innovative solutions to environmental problems.

One of the Waikato teams, Blue Tide Aquaculture, are farming toheroa, a native sea clam loved in gourmet food circles. Unfortunately, toheroa is now endangered and harvesting is banned, so farming will help revive the species and create a high value food product.

As an added bonus, the farms will be sited in Northland to give a much-needed boost to the local economy.

The team, made up of Cody Taylor, Tom Vosper, Johnny Hill and Tai Ceps, are aiming to both replenish and farm the toheroa by growing them in moulds made from recycled plastic.

The prototypes were created by 3D scanning the clam’s shells, turning them into computer models and then 3D printing them. This creates a protected cocoon for the toheroa as it grows inside the casing, and should result in less shell and more protein.

The team started working on this in their first semester last year as part of a Product Innovation and Development paper, led by their now mentor Professor Mike Duke.

“Since starting the project, the team have worked with Dr Phil Ross and Professor Chris Battershill from the School of Science. The aim is to establish an aquaculture research rig and pilot plant at the University’s Coastal Marine Field Station in Tauranga, which funding like the C-Prize will contribute to,” says Mike.

The other finalists are a team called OneBin, formed by current and graduate Waikato engineering students, who have started a company called ARCubed Ltd.

OneBin is a smart waste bin that uses artificial intelligence and sensor fusion technology to automatically separate all categories of recyclables from waste. It was created to combat the 2.5 million tonnes of waste that New Zealand sends to landfill every year.

The team were inspired by a different rubbish tracking and collection bin, which sparked the thought about whether it is possible to have two bins to determine if an item was recyclable or not in mid-air, catching it in the appropriate place. The team realised this was not a practical solution and OneBin was born.

OneBin can easily be installed in various locations such as kerbsides, shopping malls, airports and office spaces.

“We are ecstatic to be named C-Prize finalists. This was initially a project we intended to do off our own backs, but the funding and expertise that Callaghan Innovation provides is invaluable, and we are very happy to have made it this far," says team leader Carl Lickford.

“We intend to continue developing OneBin, and the finalist prize money will be used to fund the prototype and build units suitable for trial field testing.

“Looking towards the future, we’d like to make OneBin ubiquitous with public rubbish bins, and ensure no recyclables make it into landfill,” says Carl.

For Professor Mike, having Waikato students entering competitions like the C-Prize is part of the University’s aim to encourage entrepreneurial students and create an innovation pipeline.

“We want to promote project-based learning for our students, like the original paper these recent graduates started in, where they can be innovative and come up with new ideas, becoming more well-rounded graduates,” says Mike.

The teams are currently in finalist bootcamps, and the winner of the C-Prize will be announced on Friday June 5 at an awards evening. The winning team will take away a $100,000 contribution to development, and receive wide market exposure by Callaghan Innovation and ongoing support.