Cost of wire barriers worth it - NZTA 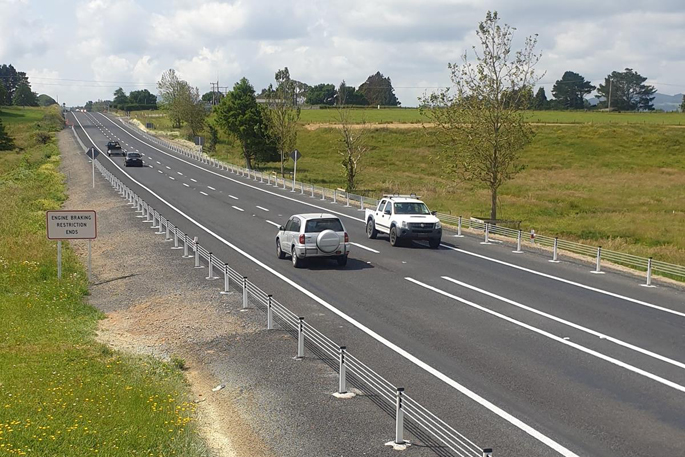 The section of SH2 Waihi with the new road safety barriers. Image: NTZA.

The cost of safety barriers on State Highway 2 between Waihi and Trig Road are justified because of their safety benefits, says the New Zealand Transport Agency.

The $611,000 is the cost of the wire rope itself and doesn’t include the work required to install it such as pavement widening, drainage and earthworks, the NZTA says.

Road safety campaigner Geoff Upson feels money is being wasted on barriers on the side of road when it should be spent on improving road surfaces.

He says all the wire rope is good for is preventing the vehicle from going off the road, but it would still hit other traffic if it crossed the centre line.

The barriers are part of the NZTA’s SH2 Waihi to Omokoroa safety improvement project, it involves widening the road and road shoulders, widening the centreline, and putting in roadside safety barriers where there are power poles, trees and deep ditches.

In the 10 years from 2009 to 2018, 25 people lost their lives and another 66 were seriously injured along this stretch of SH2, says NTZA safe network programme portfolio delivery manager Dave Van Staden.

“Most of these crashes were caused by people running off the road and hitting trees, poles or ditches, head-on collisions and crashes at intersections.

“Flexible road safety barriers like the ones installed on SH2 are proven to be highly effective in preventing serious injuries and deaths.

“The barriers ‘catch’ vehicles that leave their lane. If you hit a flexible barrier, the steel cables flex, slowing down your vehicle and keeping it upright, they absorb the impact so you and the people with you, don’t.

“They prevent you from being deflected to the other side of the road, potentially hitting another vehicle, or trees, poles or deep ditches on the roadside

“People will always make mistakes when driving, but there are changes we can make so that simple mistakes don't cost lives.

Geoff was driving the stretch of road when he noticed the barriers had been damaged following a crash so decided to do a video.

“The road surface right here is all bumpy and it’s got dips and it looks alright in the video but to drive it, it’s rubbish.”

The NZTA says the cost of repairing the damaged posts from this crash is $5700.

“To me it's common sense that the road surface needs to be flat or smooth.

“I’m not an engineer, this is my opinion. We need to sort out the road surfaces in New Zealand before we start spending taxpayers money on things like this [barriers],” says Geoff.

“Around 40km of state highway, between Waihi and Omokoroa, is being made safer,” says Dave.

“These improvements will save lives and will raise the safety rating of the state highway.

“Some of these changes, like putting in a wide centreline, will also mean this road can be improved even more in the future – a median barrier could potentially be added, for example.”

“If the wire rope barriers on this section of SH2 prevent even one serious injury crash, the $611,000 investment has been more than regained. Quite aside from the fact that real people will have avoided serious injury,” a NZTA spokesperson says.

The cost of the Waihi to Omokoroa project is $101 million with the Heath Road to Trig Road section costing around $7.5 million.

This renewed section from the bridge at Waihi to Trig Road South requires numerous signs warning motorists of the very uneven surface or perhaps for safety the speed limit should be set as 80 kmph. I wonder if the part they are working on to the Old Tauranga road will be any better when they finally finish??!!

What is more important?

If that’s the case Ross 54, Which is more important , a farmers fence or someones life.. I would go with someones life as a farmers fence can be fixed but someones life can not. Most farmers have already got robust fences anyway but it’s the new side of the highway fences are in the wrong place. They should be shifted enough on both sides of the motorway to allow a truck and trailer to be able to pull off the road safely then put the motorway fences on the outside of where these highway fences are by the width of a fully loaded truck & trailer unit. Isn’t it safer to shift these flexi-fences back enough towards the farmers fences so the motorists and heavy haulage trucks etc can pull right off the road safely.

I cant believe this .

What idiot’s would put safety wires up on the sides of a main road without thinking of ALL the traffic both on the Main Road and all the people who either have had a major crash or a breakdown and now there is no place they can safely pull off out of the way of all the traffic and get to safety on the side of the highway and what about Emergency vehicles. It’s just another accident waiting to happen. They would have made more sense putting the barriers in the middle of the road so it would slow down all the opposing traffic.

Why not centre line barriers

I would rather go off into a ditch than be flung back into traffic heading both ways (or held onto the one lane) where someone is very likely to rear end me. I don’t understand why this is not a medium strip to prevent oncoming traffic crossing over and a potential head on collision? You’ve now got an area that if you get a puncture you’ll have to keep moving till you can get off the road.... I’m totally confused? How many people have died or been injured driving off this particular section of road?

How do you safely change a RHS flat tyre?