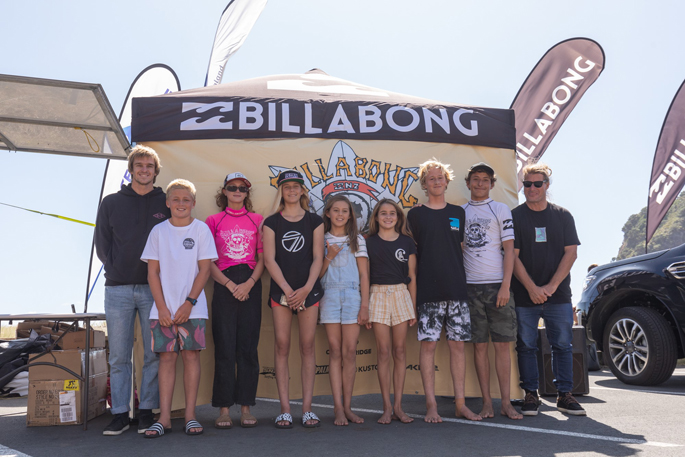 Piha’s Leia Millar and Pauanui’s Chloe Groube shared the title for the Under 14 Girls Division.
The culmination of three events was played out in solid 1.5m waves with strong cross-shore winds offering up new challenges compared with the small surf at the first two events of the series.

Event wins went to Taranaki surfer Tom Butland who won his first event of the series in the Under 18 Boys Division.

Butland had been notching up big scores throughout the event and the final proved no different as he finished with a 7.0 point ride and 11.67 point heat total for a comfortable victory.

Second through fourth were split by less than a point with Jack Lee of Whakatane getting the upper hand over Josef Jungwirth from Raglan and Luis Southerwood.

Brie Bennett of Raglan was one of three surfers to go back-to-back at the event winning the Under 18 Girls Division in convincing style. Bennett finished with a 10.66 point heat total for the victory with Estella Hungerford, of Christchurch finishing in second and Georgia Wederell finishing in third.

Raglan’s Jayden Willoughby claimed his first win of the series after playing bridesmaid at the first two events. He finished with a 12.3 point heat total besting good mate Kora Cooper from Raglan while Gisborne’s Finn Vette was stranded with a 7.5 point ride, the highest of the final, but no quality backup wave finishing in third.Navryn Malone of Raglan rounded out the final in fourth.

Christchurch surfer Ava Henderson made it back-to-back titles in the Under 16 Girls Division with a big win today.

Henderson surfed to a 10.33 point heat total and led the final from the outset. Anna Brock of Mount Maunganui edged past Natasha Gouldsbury of Taranaki for a runner-up finish and her best result of the year while Liv Haysom from Piha finished in fourth place.

Tao Mouldey made it a threepeat of wins in the Under 14 Boys Division after pushing past Ryder Pennington from Taranaki in the final with a clutch 6.6 point ride to close out the heat. Piha’s Will Hardie finished in third place ahead of Mathias Thompson also from Piha in fourth.

Whangamata’s Pia Rogers stormed to her first-ever win at national level taking out the Under 14 Girls Division with a whopping 13.6 point heat total. An 8.17 point ride at the end of the final sealed the win over Leia Millar from Piha, Chloe Groube and Alani Morse who finished