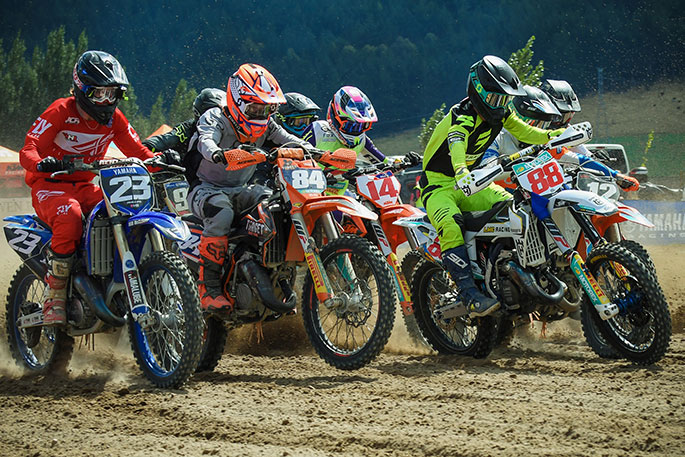 The 125cc class blasts out of the gate at Rotorua at the weekend. The racing will likely be just as fierce at Fernhill, near Hastings, host venue for the next round of the series this coming Sunday. Photo by Andy McGechan, BikesportNZ.com

The 2020 New Zealand Motocross Championships reached the halfway stage with edge-of-the-seat racing in Rotorua last weekend and there's no let-up in sight.

The riders have had virtually no time even to catch their breath before they'll need to re-start their engines, limber up and crack on with racing at the third round of four in the Fox-sponsored series in Hawke's Bay this weekend.

Mount Maunganui's Cody Cooper has dropped points, but he remains on target to retain his MX1 crown; Bay of Plenty's Josiah Natzke is edging closer to claiming his first national senior 250cc motocross crown and Tauranga's Brodie Connolly seems to be running away with the 125cc class.

But all of this could change in a flash as the nation's elite motocross racers head into battle at the popular Ngaruroro Raceway at 166 Mere Road, near Fernhill, this Sunday.

Visiting Australian Kirk Gibbs won the MX1 class at round two in Rotorua and clawed to within six points of Cooper, while west Auckland's Hamish Harwood is just 16 points further back.

Hamilton's Kayne Lamont was also strong in Rotorua and is now up to fourth in the MX1 standings, albeit 25 points behind Harwood, while versatile enduro, cross-country and motocross exponent Brad Groombridge, from Taupo, was also impressive and is just three points behind Lamont.

Natzke came under pressure from Mangakino's Maximus Purvis at Rotorua, with just one point to separate them at the end of the day's furious race action, while Oparau's James Scott, Christchurch's Dylan Walsh and Australian trio Kyle Webster, Caleb Ward and Morgan Fogarty kept them both honest.

In the 125cc class, Connolly has so far won five out of the six races at the first two rounds, but he also suffered his first set-back, forced to settle for a runner-up finish at Rotorua when he collided with another rider and had to fight through the entire field.

However, it would be a brave person indeed to bet against Connolly responding to that disappointment with fireworks in Fernhill.

Motorcycling New Zealand motocross commissioner Ray Broad said results from Fernhill on Sunday could be pivotal and may even determine where the various titles end up.

"No rider wants to be heading to the final round at Taupo, on March 15, with any degree of points deficit," he says.

"We're looking forward to seeing all the riders racing in the picturesque Hawke's Bay, a unique venue with vineyards as a backdrop."

In addition to MX1, MX2 and 125cc class racing, the Women's Cup will also be on the Fernhill programme as an added feature for this event only.

Courtesy of additional sponsorship from John Roberts Contracting, the top 10 finishers in the Women's Cup class will win their share of $1400 in prize money.