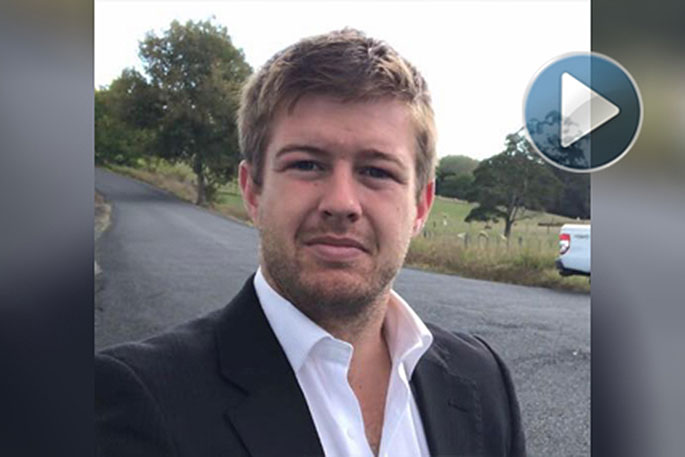 A road safety campaigner feels money is being wasted on steel wire rope barriers on the side of road when it should be spent on improving road surfaces.

In Geoff Upson’s latest video, he talks about the wire barriers on State Highway 2 between Trig Road and Waihi.

SunLive spoke to Geoff and he says the wire ropes run on either side of the highway and they cost $611,000.

Geoff’s brother and his wife live in Katikati and Geoff was driving that road when he noticed damage to the rope after a crash and decided to do the video.

“The road surface right here is all bumpy and it’s got dips and it looks alright in the video but to drive it, it’s rubbish.”

In the video Geoff uses the example of a truck hitting a dip, blowing a tyre and crossing the centre line.

He says all the wire rope is good for is preventing the vehicle from going off the road but it would still hit other traffic if it crossed the centre line.

“Let’s say, for example, one of these dips back here, a truck hits it a bit quick, their tyre blows out the truck loses control.

“Those wire ropes they're not going to do anything positive except protect that farmer’s paddock.”

Wire ropes down the centre of the road are better at preventing head on collisions but in some instances don’t improve road safety, he says.

“In some cases they don't do anything, they are restrictive for passing slow drivers.

“In a situation where a truck has a tyre blowout it's going to stop that truck from running over an oncoming car and it's also half the price, one barrier in the middle of the road is half the price of the cost of doing one either side.

“A wire rope in the centre is going to prevent a 200km/h crash, because if you've got a car going 100km/h one way and a 100km/h the other way it's a 200km/h crash, whereas at the moment on the outside, it's only protecting from a 100km/h crash with a grass paddock.”

“To me it's common sense that the road surface needs to be flat or smooth.

“We actually don't have enough money, taxpayers' money, in that pool of funds to be paying for things like the wire ropes if we can't even fix the potholes.”

The New Zealand Transport Agency’s SH2 Waihi to Omokoroa safety improvement project is being completed in 10 stages it involves widening the road, widening the centreline, widening the road shoulders to give drivers more room and putting in roadside safety barriers where there are power poles, trees and deep ditches.

The safety improvements along the first section of SH2 between Heath Road and Trig Road have been completed.

According to the NZTA website around 40km of state highway is being made safer.

The project is being split into 10 sections to help limit the number of roadworks that people encounter along the highway. Each section will take between 12-18 months to complete. The project is expected to be finished in 2023, the website says.

SunLive has contacted the NZTA for more information and will update the story when we can.

Got to be all show and no substance. Commonsense would indicate all the unformed intersections, narrow bridges and sharp blind corners as being more worthy of upgrading. Fixing these shortcomings however only highlights the poor quality of the infrastructure, costs way more and shows up NZTA as the hopeless department it is. If these fixes were made there would be nothing to show and nothing to tell. ( Except an up to spec safer road). Did anyone at NZTA consider a bus lane ..,. Consider moving the services for future widening ? Consider anything ?

… a single central barrier is cheaper and more effective than barriers on both sides? Sounds reasonable, but I’d like to see actual statistics on it.. And, there is a flaw in the argument regarding total speed of a head-on impact? (I think QI did something on this and mattbz is right). We can all agree that the top priority should be to improve the actual road?... Seems to me, that is what matters most.

Whatever Geoff, your video sounds more like a political broadcast/plug for the Nats. Not interested in propaganda thanks. And, as you say you’re not an expert.

I look forward to Geoffs next video where he breaks down how space travel is a waste of money because the earth is flat..

First Responder I think has the right approach; however, wire ropes generally are not the right answer in the end. Throughout Europe, Scandinavia and the US you’ll never see wire ropes, but you do see Armco barriers which can cope with most road vehicles. In essence, they absorb the impact of vehicles and are safer - you can bet the motorcyclists would prefer them. As for the destruction of the mid-road baseball bats, obviously they are a source of amusement at road users expense - double yellow lines should be enough, but they ain’t. Wake up NZTA and get into the 21st century.

It is futile to improve the roads, until we can improve the drivers. Most accidents involve one vehicle and a stationary object, such as a tree, a fence or a power pole. Putting in barriers will save some lives as it means vehicles will not be able to cross the road.

Couldn’t agree more here. This is NZTA’s version of the ambulance at the bottom of the cliff. Same as increasing the rate on a toll road claiming increased interest costs when interest rates are declining. And it is a substandard piecemeal road surface. Add to that the roller coaster of Takatimu Drive. Rather than fix it put a bumpy road sign up. The current NZTA focus and strategy set by CoL is a joke. Road to Zero must refer to the number of cars they want used. The money would have been far better spent sorting road surfaces. SH29 to Hamilton is the same where road works now completed have a huge bump leading on to a bridge. Uneven surface on Pyes Pa road at intersections. The list goes on.....

“A wire rope in the centre is going to prevent a 200km/h crash, because if you’ve got a car going 100km/h one way and a 100km/h the other way it’s a 200km/h crash, whereas at the moment on the outside, it’s only protecting from a 100km/h crash with a grass paddock.” Um this is not how physics works

So are those stupid orange poles in the middle of the road.The ones near Quarry road on State Highway 2 lasted about 4 days after being replaced.Currently less than half are left and has been like that for some time.

It’s the way the Roading contractors get paid. They make more out of repairs than actually building the road so it’s not worth building a decent road in the first place.

Keeping your mind on the job is the solution to safe driving. Its drivers that causes accidents not roads.We are alerted by rumble strips on the left and I think they d o a effective job as they give you a warning,wire rope doesnt,you either hit or miss and one is too late..Why not put a wide double rumble strip down the center,say 150mm wide with 150mm gap.this will give separation and warning to alert the driver.Got to be a lot cheaper.

I support wire ropes down the middle, but first it must be a good road, 2 lanes each way to allow for passing. Wire ropes along the side are dangerous. Flat tyre, break down or sick kids, you cant get the car far enough off the road out of harms way. These wire ropes are part of this Governments band-aid approach to safer roads. If the road needs wire ropes, then fix the bloody road first.

That's not all though.

Those wire ropes don’t just stop people going off the road into a paddock Geoff, they also, more importantly, stop crashing cars from bouncing off them (as with the traditional solid barriers), into oncoming vehicles and thus preventing a head on crash.