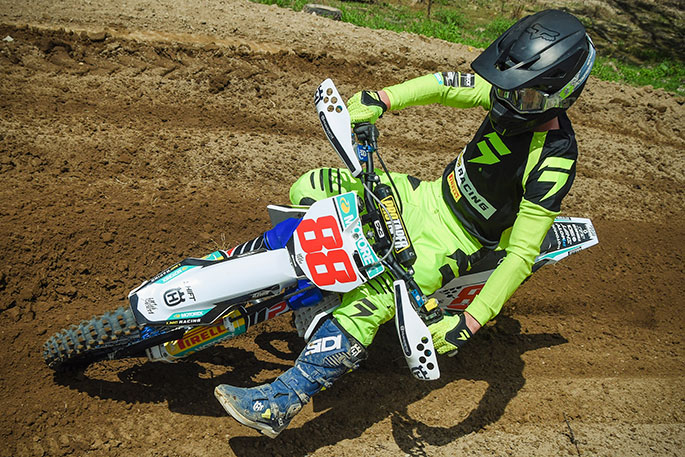 Even an unaccustomed crash at the weekend could do little to derail Tauranga teenager Brodie Connolly in his bid to win the senior 125cc motocross championships crown.

The 16-year-old Husqvarna rider from Tauranga was unbeatable at the 59th annual New Zealand Motocross Grand Prix at Woodville in January, untouchable in the 125cc class on both days of racing at that iconic event, and he carried on his winning ways at the first of four rounds in the 2020 New Zealand Motocross Championships in Balclutha a week later.

He showed up Rotorua on Sunday for round two of the championships, unloaded his LMC Racing Team Husqvarna TC125 and proceeded to qualify the bike 1.7 seconds a lap faster than the next quickest rider during the morning session.

Connolly therefore again looked to be comfortably heading towards a hat-trick of wins in the afternoon.

The first two 125cc races at Rotorua went according to plan, Connolly snatching the lead both times and leading every lap until the finish, Aucklander Cobie Bourke, who had been the second-fastest qualifier, finishing runner-up on both occasions.

But then disaster struck for Connolly as he was caught in traffic at the start of the day's final 125cc race and, in a bold bid to quickly re-assert himself, he collided with another rider and hit the dirt hard.

Then came a remarkable and brave ride as Connolly picked himself up in last place and set off after the leaders.

He picked off one rider after another and then, with the race drawing to an end he decided to settle for a runner-up finish, crossing the line behind Tauranga's Madoc Dixon, and satisfied that he had still be able to extend his championship points lead.

"I backed off near the end of the race because I didn't want to risk crashing again and maybe not finishing," says Connolly.

"I went straight to hospital after the final race because I'd hurt my finger pretty bad in the crash," Connolly revealed. "There is a small break in the bone, but nothing major and I'll be okay for the next round."

Connolly had started the day in Rotorua on top of the standings, nine points clear of Dixon. He ended the day in Rotorua a whopping 37 points ahead of the new No.2 rider in the class, Christchurch's Marshall Phillips, and Connolly remains in a confident mood as the championships now head to Fernhill, in Hawke's Bay, for round three this coming Sunday.

"Madoc and Cobie have both had a few problems at Balclutha or Rotorua and they have both dropped points, so there's really no pressure on me," says Connolly.

It could be said there was never any pressure on Connolly anyway, so dominant has he been, with five wins now from six starts in the series thus far.