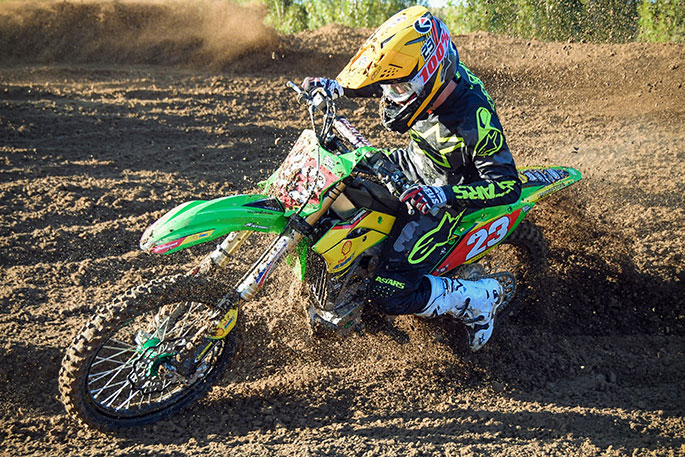 Mount Maunganui's Josiah Natzke (Transdiesel Shell Advance Kawasaki KX250F), now in stronger position in the MX2 (250cc) class after round two of the nationals in Rotorua on Sunday. Photo by Andy McGechan, BikesportNZ.com

The former New Zealand 125cc motocross champion has been racing overseas for the past few seasons and his homecoming has been glorious, the 21-year-old taking his Transdiesel Shell Advance Kawasaki KX250F to dominate at several major domestic events in recent months, his latest success coming in the early phases of the four-round New Zealand Motocross Championships.

Round two of the motocross series was held on farmland at Horohoro, about 20km south-west of Rotorua on Sunday, and by late afternoon Mount Maunganui's Natzke was able to celebrate boosting his lead in the MX2 (250cc) standings to eight points over the second-ranked rider, Mangakino’s Maximus Purvis, a good position to be in with the championships now at the halfway stage.

Natzke won the day in his class at the opening round of the series in Balclutha three weeks ago and, although he didn’t enjoy the same dominance at Rotorua on Sunday, he still managed to enhance his championship standings, inching two more competition points further away from the chasing bunch.

Natzke qualified fastest early on Sunday and then comfortably won the first of three MX2 races, leading the 12-lap race from start to finish and taking the chequered flag by a solid 15.5 seconds from runner-up rider James Scott, from Oparau.

He had more of a fight on his hands in race two, Natzke eventually fighting through traffic to finish second, less than four seconds behind the winner, visiting Australian Kyle Webster.

He suffered a poor start in race three and had his work cut out to power through traffic from a long way back in the field.

In the end, Natzke battled to fifth position by race end and, although frustrated by this result, he was grateful to leave Rotorua with his points lead intact, actually boosted a fraction, and he was happy to still be in possession of the championship leader’s red number plate.

Holding the red plate can be a huge confidence boost for the rider who holds it, a badge of honour, and Natzke is determined to keep a firm grip on it as the competition now heads to Hawke's Bay, at Mere Road, near Fernhill, for round three this coming Sunday, March 1.

The fourth and final round set for Taupo on March 15.

“The first two races (at Rotorua on Sunday) were really good, but the last race was a missed opportunity for me," says Natzke.

"I had a terrible start. I’m still moving forward in the championship chase, but I’m frustrated. I wanted to do better, of course.

“I’m happy to still be leading the championship and I’m looking forward to Hawke’s Bay. I want to come away with enough points after Fernhill that I can take a good safety buffer with me, perhaps have a race under my belt, heading into the final round.”

If he does hold it all together and wrap up the MX2 motocross title at the fourth and final round at Taupo on March 15, it will be a treasured “book-end” for the New Zealand Supercross Championships title trophy that the Kawasaki ace won last November.

Meanwhile, in the MX1 class, Bay of Plenty’s defending champion Cody Cooper continues to lead the title chase after Sunday’s racing, while Tauranga’s Brodie Connolly still rules the roost in the 125cc class.