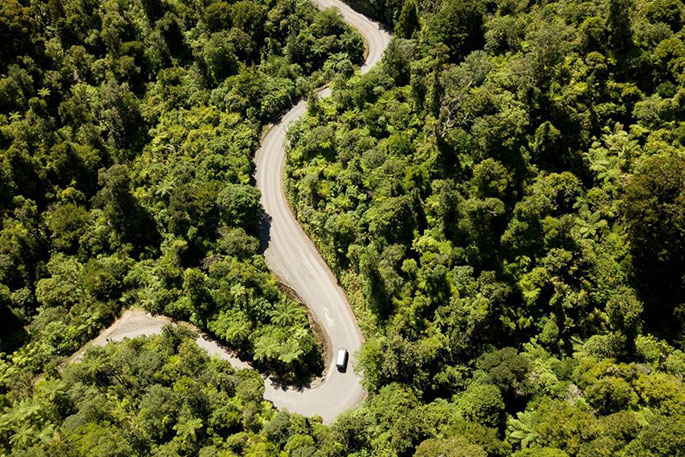 A panic-stricken woman was clinging to a car with her daughter inside as it teetered over a 100m-deep ravine.

It was around 5pm on February 20, and Darren Risby and partner Julie Dann were heading back to Coromandel Town on the 309 Road.

They spied the "tiny, older woman" who seemed to be crouching down holding a car, in a panic, says Julie, owner of the Studio 531 holiday accommodation.

The pair pulled over to a terrifying sight - a car had skidded off the road and was dangling above a ravine, nothing but air below its front wheels.

The woman, accompanied by a child, aged about eight, then spoke.

A small tree was keeping the car - a small Suzuki Swift - in place, he says.

"Anything heavier, the tree wouldn't have held.

"The car was completely off the road. She asked me to help her out."

Darren says she reached her hand towards him, and "I just grabbed it, really tight, and just yanked her out".

Everyone was "pretty much in shock at this stage", he says, and the woman was just repeating "thank you, thank you".

It was "at least a 100-foot drop" to the bottom of the ravine, says Darren.

Julie says another vehicle arrived on the scene, a ute with two men, who took the family back to the Coromandel Top 10 resort they were staying at.

Darren visited them there later, too.

"I just got a big hug, which was kind of neat."

He was quick to reject the label of hero.

"[You just] take a deep breath, assess the situation and help that person as you would your own blood," he says.

The couple believe the "dangerous" condition of the road was behind the woman's accident.

Julie says drivers often take that route, prompted by Google Maps as a short cut between Whitianga and Coromandel Town, unaware of its condition.

"Whoever is responsible for the stretch of road needs to pull their heads up.

"Someone is going to die."

He says they travelled the route in a four-wheel drive vehicle and "even we were struggling".

"If you've got a small, lightweight car in those conditions, wet, road works, big grading equipment with no warning sign ..."

Darren says that on the day of the accident, road crews were spraying water as they worked and this was onto an already-sodden gravel road, which turned it into a skin pan in places.

"If I was losing rear-wheel traction in places in a 4WD ute, then what's is like for drivers in small cars?"

He also says there were no signs, speed limits or stop-and-go monitoring in place, or warnings of the fact the road ahead would be "in a worse condition than it normally is".

"The national speed limit on the 309 applies and that's a complete flight of fancy. You cannot safely drive it at the more than 40kmh on the straights. Then there are endless blind S-bends with some major climbs, reverse cambers and no barriers. That's probably why the 309 is a stage on the Coromandel Rally, but most people don't have Hayden Paddon's driving skills.

"You get a mixture of backpackers in $1500 cars that should be in scrapyards, countless freedom campers in poxy top-heavy small vans that can roll like a dice, and half-wits behind the wheels of SUVs who, frankly, should not be. Chuck in a few local hoons and it's a recipe for disaster.

"It's not a state highway, so it's high time our local councils got their heads of out their backsides and make our unsealed roads safer.

"I don't believe in a nanny state and people need to take responsibility for the actions. But the authorities do need to act before someone dies. The outcome for this family, on a trip to Cathedral Cove, could have so easily have ended with a far-worse outcome."

-Stuff/Benn Bathgate.
More on SunLive...
0 Comments
You must be logged in to make a comment. Login Now
There are no comments on this article.