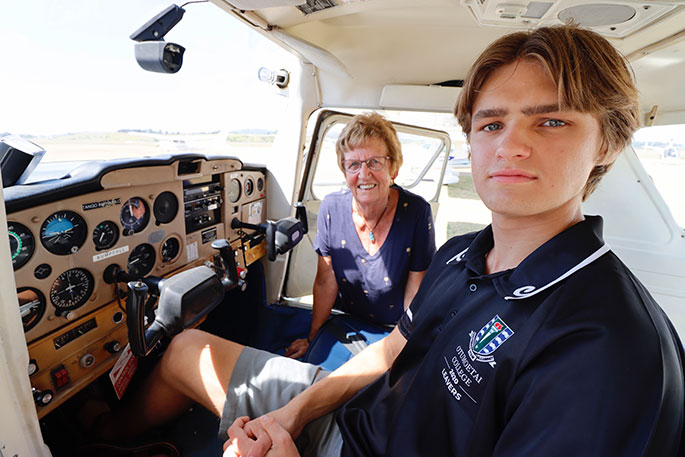 He is a suave, urbane 16-year-old with a vision.

“Ultimately I want a career as an airline pilot,” says Sam Inskeep.

He may dream of Boeing 777-300’s but at the moment he’s flitting about in a Cessna 172, getting up those hours. Thirty-nine in his log book to date.

He was flying solo over our rooftops at 1000 feet before he was old enough to drive a car on his own. That’s ‘Young Sam’, now ‘Super Gran.’

She’s 73, owns her own aerobatic rated aeroplane, an RV-6A, and is an adrenalin junkie.

“The plane gets you somewhere in a heck of a hurry – 156 knots,” says Trish Stephens.

That’s 290 km per hour for the uninitiated.  She’s also done a parachute jump and thought nothing of it.

While some people fritter their golden years in the garden or at bingo, our ‘g-force gran’ feeds off high excitement – she blats off to NZG 259, a designated air space 4500 feet around Te Puke and does a few loops and stall turns to get the heart pulsing. 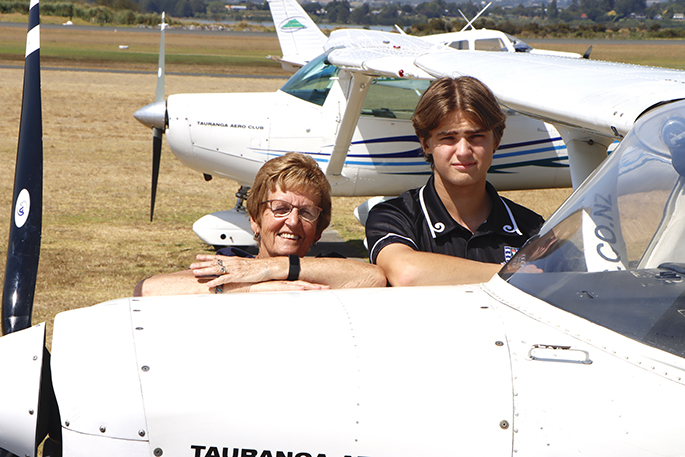 Sam and Trish have probably the oldest and youngest wings at the Tauranga Aero, which is currently hosting the Flying NZ National Championships – a week long fly-fest of formation flying, forced landings, precision landings, navigation and life raft dropping events.

Sam Inskeep is up for something called the Airways Corporation Cup for student pilot flight manoeuvres. But the logistics, the fine detail, of holding a flying championships involving more than 100 planes and competitors at a controlled airport amongst all the domestic flights, private planes, gliders, helicopters and skydiving, have grounded Trish Stephens.

“I will be too busy organising to be frustrated.”

And she will be judging the ‘formation’ too, because she used to be in the New Zealand formation team for ten years.

It’s in Sam’s DNA. His Dad is a flying enthusiast and paid for Sam’s trial flight one Christmas. Then Sam joined the Young Eagles where the flying bug is drip fed.  It’s a scheme introducing young people to the opportunities of flying.

So this young man who doesn’t particularly like sport, but enjoys mates stuff, was airborne. His first solo was an occasion.

“I remember sitting there waiting for my plane to return from another flight. I was nervous.”

But that soon settled once he “got into it”.

Trish was a late starter. She was 48 when she made her first flight. Hers was a different experience.

“You are up there and suddenly realise that guy next to you is gone. He’s the guy you would rely on if something went wrong coming into land.”

And those sweaty hands. “I don’t sweat much.” But she did that day. In torrents.

And it was running down her t-shirt, down the middle of her back. She would like to put some of it down to the heat of the day.

“I’ve had a triple bypass. They had to replace three of my arteries, six months ago.”

And while she waits for the CAA to “give her back her little bit of paper” so she can fly solo again, she’s been feeding the habit, keeping current.

“But with a safety pilot, because you can’t fly solo without a licence.”

Sam Inskeep will spend his last college year training at the club year for his private pilots’ licence. Then perhaps the Air Force and then a commercial airline.

“My mates think it’s pretty cool, but don’t mind having a joke about. They call me pilot or whatever.”

And when The Weekend Sun suggests most young men his age are at the beach or playing cricket and “doing real stuff”, Trish Stephen chimes in on his behalf. “We think flying is real stuff.”

And Trish’s take on “real stuff” can involve taking a newbie for an aileron roll – rolling an aircraft 360 degrees along its longitudinal axis.

“It’s the least invasive aerobatic. I would ask if you were ok? And if so, I would say let’s do a loop now.”

That’s not to say she hasn’t had an uncomfortable moment herself. She recalls a “stall turn” which didn’t go quite right.

“You are supposed to pull the power right back, wait for your plane to stall and then recover.”

But the plane had a mind of its own, flipped and headed down.

“There I am staring at the sea.”

But it turned out well. The thrill seeker is here, reliving the moment. Although it did, momentarily, put her off flying. But only momentarily.

“The kids who come here are self-funding and so they are passionate, they really want to fly. And that makes them better pilots, because they have the impetus to do it.”

Like “young Sam” as William Shakespeare wrote in “A Midsummer Night’s Dream” – their “souls are in the sky.”

Fantastic both of them!!!

but to your journalist?....please don’t tell me that I am ’frittering’ my life away because I play cards and indoor bowls instead of flying. People spending their days doing what they enjoy with people they enjoy, whatever the activity is NOT frittering okay? Analyse what you’ve written before publishing eh? Ta.