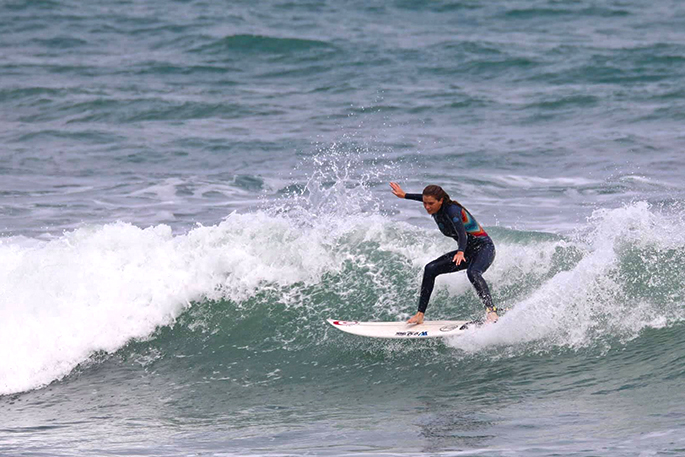 Kiwi groms from around the country are lining up the final event of the Billabong Grom Series presented by Oceanbridge this weekend with six series titles on the line come Sunday.

Participants will be spurred on by guest appearances from 1999 World Champion Mark Occhilupo and current World Tour surfer Ryan Callinan both of Australia who are here on a Billabong promotional tour. The two surfers will be at the beach on Sunday to witness the action in the finals.

Piha Beach provides the setting for the final event after stops at Mount Maunganui and Whangamata. The swell is expected to offer vastly different conditions compared with the first two events. A 1.5m swell and onshore winds is forecasted with conditions expected to challenge participants.

Whakatane surfer Luis Southerwood sealed back-to-back wins in the first two events of the series and barring a disaster in the first round of the Under 18 Boys Division, will claim the series title.

The Under 18 Girls Division is a head-to-head battle with current leader Georgia Wederell from Mount Maunganui and Christchurch surfer Estella Hungerford. A runner-up finish will be enough for Georgia to claim the title but a third-place finish and a win by Estella would see the two surfers finish in an unbreakable tie.

The Under 16 Boys Division is the most hotly contested with the top five surfers all in with a chance of taking out the series. Raglan’s Jayden Willoughby and Kora Cooper are the front runners but Finn Vette from Gisborne has been the form surfer this summer and could sneak up and grab the series win with a big performance this weekend.

Taranaki surfer Natasha Gouldsbury can seal a series win by finishing runner-up or higher in the Under 16 Girls Division. Natasha and Piha surfer Liv Haysom will battle it out for the title with Liv needing a win and Natasha to place third or lower.

Mount Maunganui’s Tao Mouldey is being chased by a big pack of surfers in the Under 14 Boys Division. The young goofy foot surfer won the first two events of the series and he will be impossible to beat should he advance to the semifinals or further.

Pauanui’s Chloe Groube holds the upper-hand in the Under 14 Girls Division but local surfer Leia Millar can seal her own fate with a win which would be enough to leapfrog Chloe and take the series.

Action will take place from 8:00am each day with surfing running through to late afternoon.