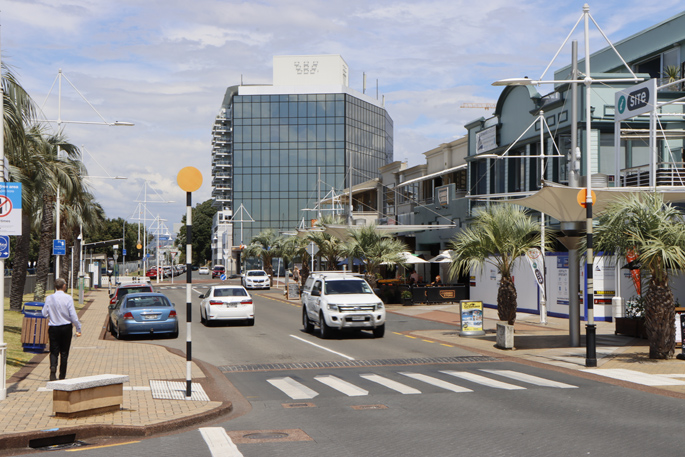 After a summer of “suffering”, businesses in the Tauranga CBD are banding together and getting behind an initiative that could bring more life to the streets.

A collaborative fund will see the reinstatement of free shuttle buses from the Port of Tauranga to the CBD for cruise ship passengers.

It’s set to kick off next Wednesday and run until the end of cruise ship season in April.

Around 20 local business owners will be taking money out of their own pockets to contribute to the fund, with one retailer handing over $18,000.

“It has been a very rough summer, and that's because we haven't been seeing any cruise ship passengers. We are prepared to pay that much, it's survival for us."

Those are the words of Fancy That business owner Frances Campbell.

Tauranga City Council, Mainstreet Tauranga and some inner-city property owners have all put “lump sums” towards the fund. Council has agreed to hand over $20,000.

Mainstreet Tauranga operated a free shuttle service from the Port to the CBD for cruise ship passengers in November last year. The service was ended due mid-December due to a shortfall in funding.

“We saw a huge difference in sales in November. And there were people in the CBD for god sakes,” says Frances.

Former councillor Terry Molloy has spent the last few weeks seeking financial contributions from CBD retailers. They will each give an amount of their choice per cruise ship day, says Terry.

“The response from businesses has been positive, but there is an awful lot of pain in the CBD and many of them aren’t making any money. Some haven’t been able to contribute.”

Terry says he couldn’t just walk away from issues the CBD facing, after pushing hard to resolve them in council. “I just wanted to help out where I can.”

"It’s something we have been all been working actively on throughout the season, and it will contribute to the city's vibrancy."

She says tourists must know the CBD hotspots, to ensure they have an "exemplary" experience while visiting.

"They need to know where to shop and dine, and tourist attractions to visit."

"There's a whole range of things that will contribute to the revitalization of our city centre, and this is just one of them. But it’s a great one," she says.

Free shuttles will only run when cruise ships with more than 1000 passengers dock in Tauranga.

I think this is good. We need more people down town to influence new shops to open. If you’re from Tauranga you should support this and your township as much as possible. Someone mentioned about taking tourists to The Lakes or Bayfair? These are just your usual malls you can get in any country. They have no character like down town Tauranga and Mount Maunganui town does. Where’s everyone’s loyalty in this town?

You would have to be desperate to shop in the CBD, the variety of shops leaves a lot to be desired,most of the decent shops have already closed or moved elsewhere so bringing ship passengers to the City is a waste of money and their shopping experience.

Virtually every retail business in the CBD is for sale if you care to enquire.

The horse has bolted

This seems like closing the stable door after the horse has bolted. Drive down Devonport Road and you can see 16 vacant shops. On the weekends when the tourists are out and about most of the other shops are closed. So, let me know the point of spending money to flog a dead horse. Take the tourists to Bayfair or The Crossing where real shops are.

Note that ratepayers are contributing another $20,000 presumably in addition to all the other hundreds of thousands of dollars Downtown Mainstreet Tauranga already gets. Also note that the Tauranga Mainstreet spokesperson is Sally Cooke who was heavily involved in Mayor Powell’s election campaign? How much more ratepayer money is going to be given to prop up these businesses and where can I apply if my own business needs subsidy? I guess some people are just special or well connected?

The membership of Mainstreet Tauranga has been compulsory for many years and the members contributed funds in one form or another to the sum of about $702000.00 ( AGM Financial report ) last year. What that money has been used for remains unanswered! With that amount of money passing through their books one would expect the Mainstreet Board to fund these shuttles but no funds are available hence the reason why a small number of members have had to front up with large amounts of money to help extend the lives of their businesses and the life of the CBD. There is a lot more information to be revealed but all in good time.

Good luck with that, Mmm. Its sad that the downtown has lost shops and has had a period of decline in my perception at least. I have seen cruise passengers wandering around in town and wonder why when the Mt is more vibrant and busy. Still hope the street beggar people don’t return to make the area less inviting for visitors. It’s not helpful the council has reversed the bylaw that seemed to improve our image and self respect as a city. It remains to be seen whether these people will benefit from the coordination promised by council and aid organisations. Hopefully not all talk.

Nice to see them put their hands into their own pockets just like retailers elsewhere have too. Now they have also to put up with the beggers etc that attract such great customers. Something about flogging a dead horse.