Nasty nipper numbers on the rise 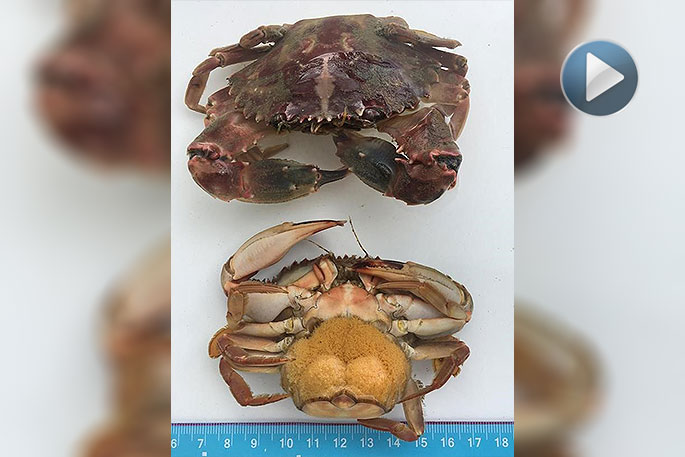 Underwater trapping across the Bay of Plenty coastline this summer by Bay of Plenty Regional Council confirmed that the aggressive Asian paddle crab has become well established in Tauranga Moana and has spread further along the coast.

“These crabs are nasty pieces of work. They have a huge appetite, feeding on shellfish such as pipi, tua tua and cockles - threatening kaimoana (seafood) stocks and potentially mussel farms in the region. They are also far more aggressive than your average native crab and can inflict a vicious bite with their large pincers if disturbed."

The crabs were first found in Tauranga Harbour in January 2018, when two were caught near Matapihi Bridge.

This summer the number caught has risen to 42 for Tauranga Harbour and for the first time two crabs were also caught in Ōhiwa Harbour.

“It’s not known how the pest originally spread to the region, but it’s likely that they either swam, floated here or hitched a ride on a fouled hull from further north. Asian paddle crabs are already widespread in Northland and the Hauraki Gulf."

Regional Council is looking to work with local hapū kaitiaki both in Tauranga Moana and Ōhiwa Harbour to help with further detection and control efforts.

Harbour users are encouraged to keep their boats clean and also keep an eye out for Asian paddle crabs. If the pests are discovered, they should be killed on site and reported via 0800 STOP PESTS (0800 786 773). It is illegal to move living pest crabs.

Additional information:
• The Asian paddle crab is comparatively large; adults have a shell width of around 12cm and paddle-like hind legs.
• They have six distinct spines or spikes on each side of the eyes, differing from similar-looking native crabs which have just four or five spines in the same location.
• In New Zealand Asian paddle crabs prefer to hide in estuaries (where there is firm sand or muddy fine sand) in depths of up to 15m.
• As well as being very capable of swimming large distances, adult paddle crabs can produce hundreds of thousands of offspring. The larvae can float in the water for three to four weeks, during which time they can be moved large distances by tides and currents.
• Experiments have found that one hungry Asian paddle crab can consume up to 42 young bivalves (such as cockles, pipi or mussels) in 24 hours.
• The Asian paddle crab originates from South East Asia where it’s normally found in the waters of Japan, Korea and Malaysia. It was first reported in New Zealand when it was found in Auckland in 2000. It’s now become widespread in the Waitemata Harbour and wider Hauraki Gulf.

A pot of boiling water

and plenty of melted butter should fix that problem...om nom nom nom.