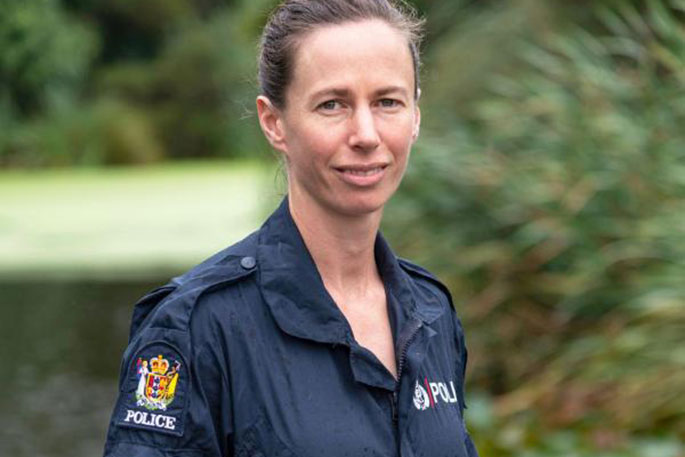 A constable who swam a gorge river 18 times in the dark to rescue a group of stranded youngsters has been praised for her exceptional and potentially life-saving effort.

Constable Rochelle Andrews, from Search and Rescue Wellington, ferried the party to safety, one by one, across the Hutt River at Kaitoke, Upper Hutt.

“She was able to remain composed and reassuring to each person rescued as she explained what needed to happen, what was happening, and what was likely to happen. I’m very proud of her actions.”

At around 3pm on December 29 the five children aged between 11 and 16, and one adult, arranged to meet family members at a swimming hole in Kaitoke Regional Park.

They were wearing only togs for the visit to the swimming hole, a short distance from their campsite at the Greater Wellington Regional Council campground.

When they had not reached the swimming hole or returned to the site by 4pm, concerned family members contacted the camp ranger. The ranger coordinated a search but at 6.30pm police were called.

The search area included the Hutt Gorge, the site of multiple searches in the past for people stranded by rising water levels, hypothermia or the challenging terrain.

The LifeFlight Westpac Trust Helicopter was sent to search and, with light fading, spotted the group huddled on a ledge, unable to either safely progress down the river or make their way back.

“The group were in an area of bluffs that prevented them being winched out without getting into the water and putting themselves at further risk,” says Rochelle.

“Those risks were compounded by the fact that they had no form of communication with us so could not be informed about what was going on.” 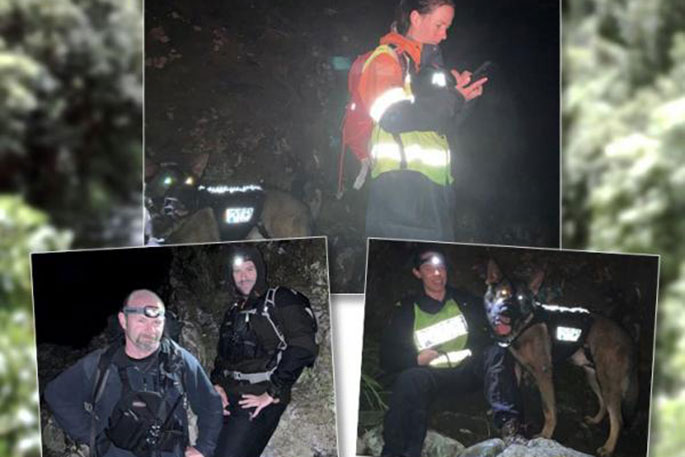 The helicopter pilot had already pushed the machine to its safe operating limits and, unable to get into the gorge safely or reach the group with its 45-metre winch line, flew back to base.

Rochelle, Dan and Kong continued to the gorge to assess the situation and establish communications with the group.

Meanwhile, other Police SAR staff were arriving. Among them, Detective Geoff McGhie and Constable Caitlin Nicholson gathered warm clothing for the group from family members and made their way to the rescue site.

“When we reached the site it was clear the group were trapped by the river, which was approximately nine metres across with steep high bluffs either side,” says Rochelle.

“The group were showing signs of early hypothermia, especially the youngest – they were still dressed in just their swimming togs with the air temperature dropping fast.

“We couldn’t make voice contact effectively due to the noise of the river and distance. After a risk assessment, I made the decision to swim across with a dry-bag and provide a limited number of survival blankets and additional clothing that I had.”

She swam across twice to take the blankets and clothing to the group and reassure them help was at hand.

Rather than leave the group there until morning, it was decided a rescuer attached to a safety line would swim over and bring them to safety. Rochelle volunteered, with another SAR member standing by to take over if fatigue or cold set in.

"The kids were scared to get back in the water but they were really brave,” she says.

“They had been on the ledge for about nine hours and were freezing. One saw an eel nibble my leg and got a bit freaked out by that too.

“After swimming across the river and back for each party member I was cold, tired and starting to shiver. I was able to get into dry clothes once finally finished – thank goodness for respectable underwear that day!”

After the rescue, Rochelle - who says she's a "confident but not brilliant" swimmer, but has done swift-water rescue training since joining Police - went back once more to collect items left on the ledge.

The party were airlifted to safety by an RNZAF NH90 helicopter with night flying ability, crew operating with night vision goggles and a longer winch line.

As the sun rose they arrived back at the campground, where Ambulance and Police staff “and some pretty elated family members” were waiting, says Rochelle.

“All this effort was achieved during the hours of darkness and in a river gorge that provided an inhospitable rescue site,” says Ants.

“Rochelle, supported by the team, saved six lives that night and that’s something to celebrate.”

A worthy policewoman. A worthy news story. Thank you NZ Police for a good job. Not thankless, for many of us appreciate your service. Arohanui.

What a hero! Full credit.