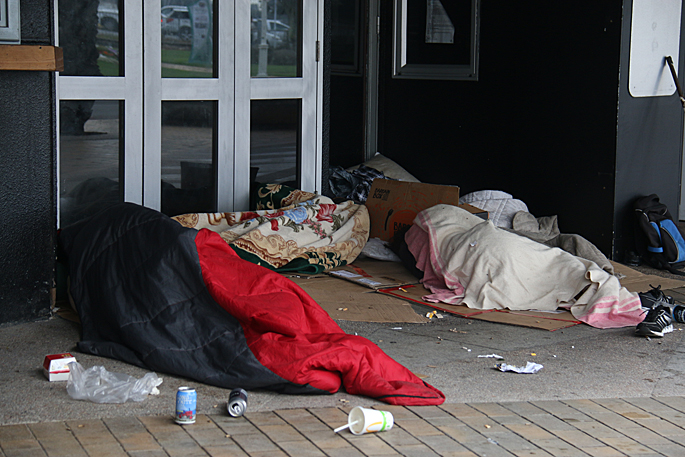 The committee met today to discuss the controversial bylaw

The bylaw prevented people from begging and rough sleeping with five metres of public entrances to retail or hospitality premises in the Tauranga City, Mount Maunganui and Greerton CBDs.

The policy committee recommended 6-4 in ditching the ban. It will now go to a full council meeting next week for a final decision.

“I understand this is a difficult situation for both business and people reduced to begging."

Angie believes the begging ban was a knee jerk reaction to what is a highly complex issue.

“I believe that as a city we can do better.

Angie says she will “continue to work hard to ensure that Tauranga gets the support we need in collaboration with iwi, social service agencies, local government and the many volunteer organisations like Street Kai who help our people”.

Time to fire a whole lot of out of touch politicians and councilors.....again!

Out of touch elected members

This Current Council is totally out of touch with the community. Perhaps it’s time to pact the Council Chambers at the next full Council meeting when the recommendation will be discussed and voted on by Full Council. This is beyond belief.

keeps me out of CBD

With intimidating beggars on our CBD streets keeps me and my friends away.Councillors dont judge how they behave towards you,watch how the harras the elderly

Are we in the midst of a far left wing social experiment? Why would you revoke this ban? What is unreasonable about it? We do not want our young children subjected to drug addled, often violent vagrants every time we go to the shops! The way it used to be there was human waste and urine all over the place where these people were and many felt unsafe to visit areas where they would be - look at the revival Greerton has undergone since they have been moved on. As another poster said it looks like we will only be visiting malls from now in Tauranga, at least the mall security moves them on the moment they are seen before they can stalk children, excrete waste onto the floor or attempt to steal from citizens.

lets all speak with our wallets

everyone go mall shopping and leave the CBD for the council and the deadbeats of society. I feel for the retailers though having to put up with all this idiocy from our ignorant council.

How can enforce a bylaw that is against human rights? How can you enforce people sleeping in door ways when its private property? These remarks don’t help the situation and to believe it’s a council issue when these people start abusing you, it’s a Police issue. Maybe if Greerton was relevant it would be successful as for the smaller shopping areas they to slowly dying, so stop blaming the "homeless" for poor business decisions.

Why fix something when aren’t broke,the ban is working well, and some of these beggars are not for real,coming into the CBD to beg.Hands off TCC.

These councilors are so out of touch it’s not funny. Most of these "beggars " are actually professional beggars. They are delivered to their assigned place of work each day by a car . The driver returns at various times and the "takings are handed over to him. He also drops off lunch and a water bottle. The beggar has a cellphone hidden away, have you not seen them apparently talking to themselves... and they identify people for the handler who may be a great target for other attention. Don’t believe me councillors , do some PROPER research before you make a stupid decision.

Let's have a new election

What a disappointment this new council and mayor are turning out to be. They can’t even support our downtown retailers by stopping people sleeping in their doorways and intimidating customers begging for money. It’s ludicrous using ratepayers money for that downtown promotion outfit on one hand and allowing this begging nonsense. Also at the same time the council is grandstanding over law and order, but don’t do anything practical.

I am totally with you !!! Shopping in the CDB - BEGGERS everywhere !! Shopping at mall - NO BEGGERS as the mall owners security move them on so fast that their feet don’t touch the ground !! So you know where 90% of Tauranga shopper go !!!

.... that people we voted in to represent us ratepayers could be so stupid as to ignore us and let these good-for-nothing layabouts once again take over our city! Having worked in an organisation who tried to help and rehouse these street people, it became a thankless task as most enjoy this way of life and are not interested in any alternative! I feel so sorry for the shopkeepers of the CBD and suburbs - they have spoken up and been ignored!

Nothing TGA city does works. The bylaw didn’t work anyway. I have seen nobody inforcing it. Take the easy way out council as always . Get out of your gin palace and walk around the cbd. I count 50 plus for lease signs half demolished buildings abandoned buildings. Lets not mention the transport hub or Bella Vista. Your are a joke TGA city council Oh I forgot to mention Vessal Works total balls up. No beggars and general losers in malls or for lease signs. Take a look at why council and this will get people and money back to the cbd.

If you want them lazing about why dont you invite them to your place and give them your money .leave us citizens to enjoy our city

No, please Don't reverse the ban

Maybe you haven’t t been subjected to the behaviour of these people? Urinating in doorways with no concern to passersby, spitting swearing or throwing things when pedestrians don’t acknowledge or donate. Get them gone or find a place for them away from the city. I was stalked at Robins Gardens, very scary for a not so young female out to enjoy the city. And as below, not the best look for a tourist city.

No, you’re not missing anything. Well said.

You have drug dealers and thugs operating with impunity in broad daylight on Willow Street, a mere 200 metres from the cop shop. So what chance of clearing beggars away? None.

The begging ban is not a knee jerk reaction at all when business owners and shoppers, including elderly people were being threatened and harassed by these people.Angie’s remark is a typical labour government answer,defending society’s deadbeats,and to hell with the business owners trying to make an honest living.If the council revokes this bylaw the mayor’s earlier statement about bringing more shoppers into the cbd is totally worthless,because that won’t happen.

It is not a good look for the city to have these people in doorways but just moving them on is not the answer. I have never been hassled or felt scared in Greerton or the CBD so I am not put off by them. I am put off and frightened by other things in both places but not the beggars.

This law did not seem to be enforced. I have felt sad and intimidated by some of these people. I do not wish it to be swept under the carpet however when you are trying to encourage shoppers to return to the CBD, this is a bad move to revoke it. You need an alternative plan. If you revoke it, it will be the death knell in the CBD. The Council has already done their best to kill it with closed roads and construction.

… I now know who I WON’T be voting for. There was no "knee jerk"; there was necessary action and it worked. Great to see the Government addressing homelessness, but unless those millions translate into clear shop doorways and unfettered access to the CBD, it isn’t doing ME any good. There is no need to revoke the legislation until we see that the proposed measures will solve the problem and positive actions on homelessness alongside the current laws are NOT mutually exclusive. If you want the law revoked, then get cracking and establish that your solution will work. Meanwhile, leave an, admittedly Draconian, Law in effect because it is what we currently NEED. Anyone in Council who votes to revoke this will have their card marked, at least as far as I am concerned.

Ok...so one minute you’re trying to work out what’s gonna bring the retail spenders back to the CBD & next you’re gonna allow begging & rough sleeping back too. Doesn’t make sense to me, it looks terrible & they can be very abusive people if they don’t get what they want. Looks great for the cruise ship tourists too huh...not.... again who the council is trying to attract to Tga CBD rather than bus off to Rotorua & Hobbiton?!? Really can’t see how this is making forward progress for our awesome city!! Maybe I’m missing something??

Clean up Council. If you clean up our town like this then I reckon clean up Council and get one that acts not talks. More time and money wasted. I’ve changed my mind, you may as well put that bottle store in and I’m sure some more vaping shops and a ’medicinal’ marijuana shop would suit too alongside some tattoo parlors. Labor couldn’t even deliver on Kiwi-Build and now in election year they expects us to believe they’ll come through with transitional housing. Yeah right. Does public safety from these beggers not mean anything to you TCC. These beggers and rough sleepers are giving our truely homeless a bad name. About time you started walking the talk TCC.

From my perspective as a shopper the bylaw works just fine . Previous to the bylaw I certainly felt sad and a little intimidated and some I believe felt nervous a d even threatened. You say as a city we could do better and I don’t disagree and a collaborative approach may be fruitful. However the two are not exclusive. The bylaw remaining while improving liaison with various groups can happen . Surely part of a combined strategy