Council calls for people to dob in the dumpers 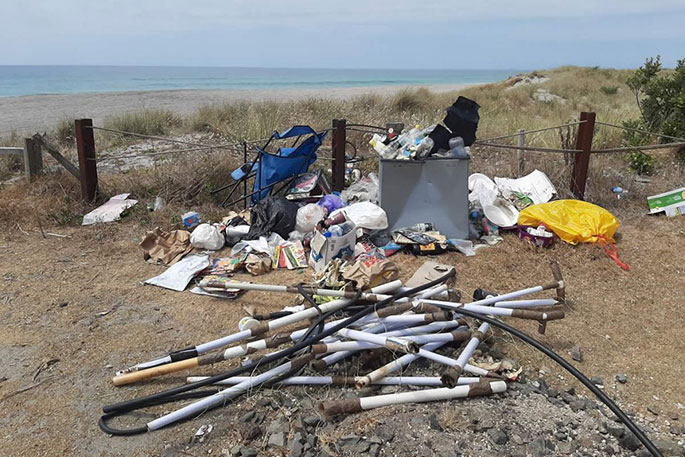 Dealing with fly tippers and people who don’t clean up their dog’s poop is a filthy and frustrating problem, says Whakatāne District Council regulatory staff who are often left to tidy up the mess.

Encouraging these people to change their ways isn’t working, so the Council is targeting its latest messaging at the 95-plus per cent of people they say do the right thing.

And the message is simple: Dob in the dumpers or we'll all continue to pay for their laziness and lack of respect.

The appeal follows continual fly tipping incidents and a customer enquiry from a Harbour Road resident who says the harbourside beach near her property is regularly littered with dog poop.

Council Community Regulation Manager Graeme Lewer says he's frustrated about the lack of respect for the environment that he and his team see on a regular basis.

"While most residents dispose of their waste responsibly - including dog poop - it's the same old story of a few people spoiling it for the rest. We need help to identify the individuals responsible for these disgusting activities, so we can find them and fine them.”

Anyone who sees illegal dumping taking place is asked to record the vehicle registration number and any other information that may assist Council to identify those responsible.

This also applies to dog owners who don’t pick up their pet's poop if they have a vehicle. Otherwise, a description of the dog, its owner and the time and place of the offending would be useful for Council staff.

The Harbour Road resident, who did not want to be identified, says she has spoken with a number of offending dog owners about picking up their pet's poop, but is often ignored and has even been abused.

She says Whakatāne’s population has increased and so too the dog poop problems.

The resident says more signage and enforcement might help, but the Council should consider whether dogs should be banned on some popular beaches, similar to what happens on the main beach at Mount Maunganui.

Graeme says some illegal fly dumping sites have been littered with basic household rubbish, but others have been the drop-off point for whiteware and electrical appliances.

"These people might think they're saving themselves some dollars by throwing out their rubbish illegally, but they're putting that cost back on to the ratepayers, and on the environment.

"A lot of these items can be donated to charity or even sold at a garage sale or on Trade Me. We've also recovered a number of items from dumping sites that could have easily been taken to Community Resources Whakatāne (CReW) in Te Tahi Street for reuse or repurposing."

The Council has a number of resources available on its website and in its offices that can assist residents with tips on reducing residual waste, knowing what can be recycled, and where different types of waste can be responsibly disposed.

"This type of anti-social behaviour is an ongoing problem that can't be solved by Council alone, so we're appealing to the good people of Whakatāne to let us know who's doing this stuff so we can clean up the problem and save unnecessary costs."

Get used to it

With fees for dumping I’m not surprised. I was horrified when I got the bill for my bins over $500 a year. Do changed to one big bin instead at half the price. Of course lots won’t pay or can’t afford that nor will they go to the transfer station as that costs too. Used to be it was included in rates. Now we pay more rates but actually get less services.

The picture shows that most of what has been dumped would be recyclable - free to properly dispose of. The balance would probably have fitted into a rubbish bag. This is just a sign of appalling laziness by someone who seems to think they have self entitlement. You dumpers need to start thinking of others and I really do look forward to the day you are caught, named and shamed and you will be. I’m picking they were too gutless to dump it daylight.

As I have said before...

Why not get trainee forensic (police) students to treat the illegal dump sites as ’training forensic crime scenes’... so the trainee scientists can go to these ’crime scenes’... gather and bag the ’evidence’ and run fingerprint and DNA tests on the stuff, just like if they were at a ’real’ crime scene. These dumpers will unlikely not have made any attempt to remove finger prints... and the trainee scientists can learn with some ’real life’ out in the field training?

Do your own dirty work

It's a simple message.

Nobody likes to be a "grass" but this is a case where the people concerned have no respect or regard for the rest of us. And they SHOULD be dobbed in.