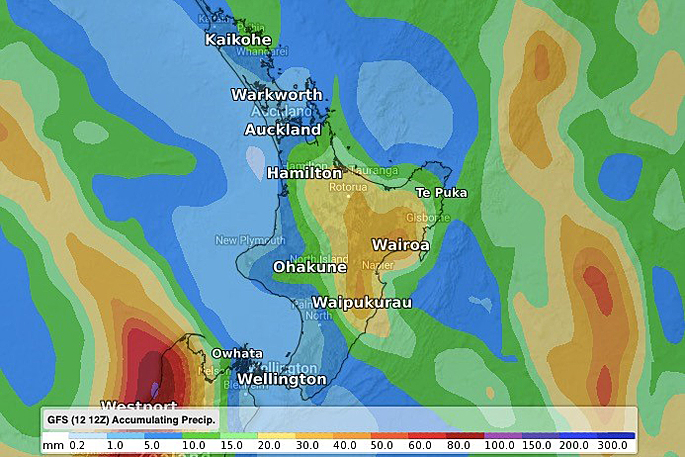 “Tropical storms are bubbling up and coming near New Zealand and while the North Island misses out on direct rain, there are some silver linings.

“While Government is very slow to formalise droughts - and so far only Northland has an official one - drought conditions are already across Auckland, much of Waikato and increasingly into other regions in both islands. They will get bigger and more severe before there is any relief,” says the weather organisations.

“The long range forecast is still a mainly dry one - but there are some silver linings appearing.

“While this week’s tropical storm is well out to New Zealand's east, it may help encourage more showers into other areas.”

Airflows are shifting in the week or two ahead with more easterlies and north easterlies with both tropical lows likely to leave behind some shower energy.

“While Uesi helped pull down some showers in the upper North Island - isolated and some only just a drizzle -  there may be a surge of heavier showers along the western side of the North Island this week.

“This week’s storm will be well east of New Zealand, but the shape of the air pressure systems should encourage more showers in the east thanks to an enhanced East to South East wind. Showers may start to accumulate better totals, as you can see in the eastern side of the North Island rain map below. These showers may drift inland - or may help produce new inland downpours.

“Finally, the humidity that will increase for some in the days ahead will also enhance the chance of some heavy afternoon downpours, mostly inland through the North Island and perhaps some into the upper South Island.

“While we're focused on as many positive as we can, it's also worth stressing that the rest of February looks drier than average and that drought zones will get larger and more serious before February has finished.”