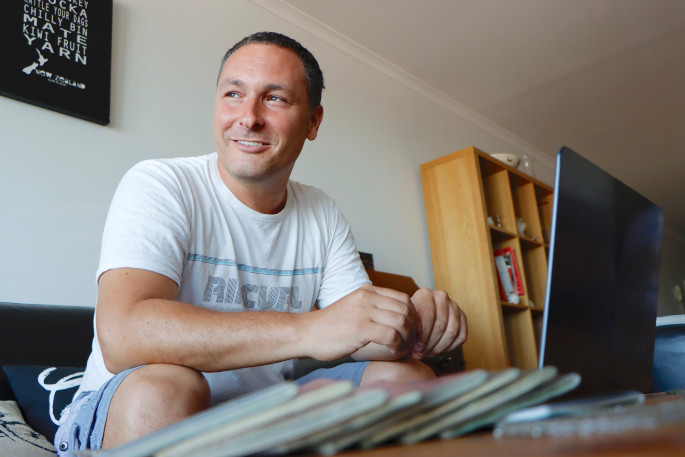 Chris Sutherland has ticked off all 195 countries of his visiting list, collecting nine passports while doing so. Photo: Daniel Hines.

He’s been to every country on Earth - 195 countries to be exact.

Chris Sutherland left New Zealand when he was 18 and hasn’t looked back since.

He’s now back in Mount Maunganui visiting Mum but what got him travelling was a Swedish girl on exchange. She convinced him to head over to Sweden, where he stayed for nine months before heading to the UK, doing the usual bar work and travelling – a lot.

It wasn’t until three years ago that Chris realised he had been to about 130 countries.

With only 60 left to tick off the list, he decided to travel to the rest. He says you feel so close to completing the list already but you’re only about a quarter of the way there because you’ve visited all the easy countries.

“One hard [country] is worth three or four easy ones,” he jokes.

He travels out of pure curiosity, with his favourite country being the Philippines where he spends about four months every year.

Another recommendation is Columbia.

One country he found really difficult to visit was Haiti.

“It’s impossible to find food. If you find food on the street it’s covered in flies or that kind of thing. It’s also crazy expensive.

“Like there’s no money there, but everything’ double, triple the price of anywhere else because they don’t have the infrastructure and stuff.”

He says Haiti is still recovering from the devastating 2010 earthquake and is still in ruins. A lot of people are really struggling.

He has spent a lot of time in Africa and says every time you cross the border into a different African country it’s a massive change.

A couple of months ago Chris was in Benin, which is the voodoo capital of the world.

“We managed to gate crash a ceremony. There are no tourists or anything, it was like midnight and they were all in their white robes chanting and stuff. We just followed them and it was really uncomfortable because we shouldn’t have been there. Eventually they sacrificed a kitten, a puppy, along with chickens and goats. It was the real deal and didn’t finish until five in the morning, but we sneaked off a bit before that.”

Chris found himself in a life-threating situation in Congo.

“It’s a long story, but I ended up in a basement with a group of girls and they ended up locking the door, jumping and punching me and taking my phone and passport which is not ideal. I eventually managed to buy it back for $100, but that was a very good deal.”

When Chris isn’t traveling or getting himself into out of the ordinary situations, he works in Norway as a chef. He works there for about four months during the year, during their summer period. He says not many people want to do his job in the kitchen because you have to work nights and weekends and they prefer an office job instead.

During his four months, he works like crazy working 15 hour days, six days a week.

“The atmosphere’s amazing, because they have such horrible winters. When the sun comes out, they just go really wild.”

Most people can’t put a finger on the best thing they’ve done while travelling, but Chris says his was while in South Ethiopia.

“The tribes there are just incredible. This is the ones with the huge lip discs and in this one area, there’s like seven or eight tribes that are completely different all within a range of a couple of hours from each other.”

Chris was lucky enough to stay the night with a family in one of the tribes and got to experience and watch how they went about their lives.

“I got really lucky in this particular one – they were having a wedding, so it was like something out of a movie. Everyone’s just sitting around with ladles of alcohol and just drinking nonstop and just having fun.

“The family all sleep outside every night and the little kids sung me a song before they went to bed and then in the morning they’d get up, they get their one plastic bottle to milk the cow. They just live off the land.”

Chris’ recommendations for anyone wanting to travel is to go to the different places.

“Everybody goes to France, Spain and what-not, and there’s just so many other good ones. I really recommend Africa. It’s very difficult and expensive, it’s more expensive than pretty much anywhere except Europe and South Pacific, but just try out some new ones and don’t stick to the rule book.”

It’s been three years since Chris was last in Tauranga and he has noticed a rise in restaurants and sushi places. He has also noticed the Mount was really bustling and lively.

A lot of people complain about the traffic around Tauranga, but Chris says it is nothing compared to countries like the Philippines and Manila, with him saying nothing comes close to Nigeria.

He says while there he took a taxi ride at the wrong time. It was a 20 kilometre trip across the city centre which ended up lasting four and a half hours.

Chris wasn’t in Tauranga for long – he flew in on Sunday, February 9, and flew out on Friday, February 14, before heading off to another country for another adventure.

He’s up, he’s down, he’s flying all around like only Peter can, Peter Pan!