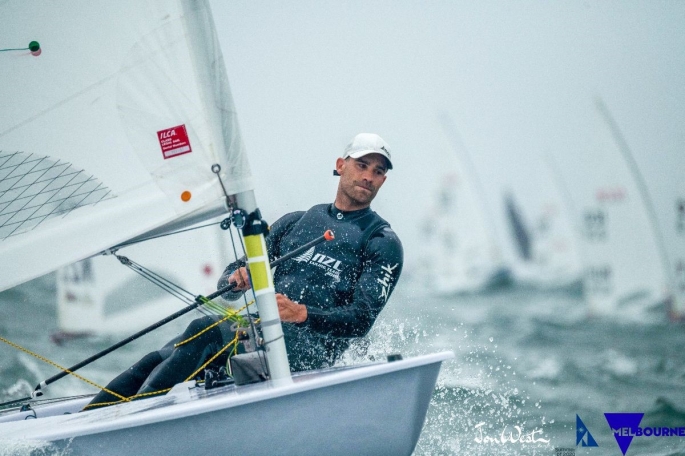 For a group of sailors who pride themselves on being near the front of the fleet, the Laser world championships in Melbourne did not turn out as hoped for New Zealand's top three sailors.

The Olympic bronze medallist was eighth and, even then, it wasn't a result he was satisfied with.

Meech has been one of the most Laser consistent sailors in this Olympic cycle and in the two years up until the end of 2019 had finished no worse than sixth at any regatta.

Meech went into the final day in eighth and still with a realistic chance of claiming a medal, especially with three gold fleet races to be sailed in conditions in excess of 20 knots, but he just couldn't find the formula to work his way up the table.

"It didn’t go to plan," he says. "The conditions were really good and I thought it was a good day for me to move up the leaderboard. I got fantastic starts in all three races but I was really struggling on the reach and first run and found myself out of pressure and swallowed by the fleet.

"It was just not what I hoped for. I’m happy with how I started but just didn’t finish off, which is usually what I pride myself on. I was expecting a little bit more.

"I felt like I was sailing really well [this week] and had the form but just wasn’t making the right decisions and wasn’t feeling the conditions. Sometimes you are in pretty good flow with the shifts and tacking in the right places and I just wasn’t doing that this week."

One who was feeling it was Philipp Buhl, who put together an incredible week of sailing.

The German never finished out of the top 10 across 12 races in what is considered the most competitive of all the Olympic classes and also notched four race wins to finish 14 points ahead of Australia's Matt Wearn. Croatia's Tonci Stipanovic was a distant third, 26 points adrift of Wearn.

Saunders started the final day in 10th and with an outside chance of a medal, but fell out of contention after finishing 37th in the first race of the day.

"That wasn’t a good start to the day and I had to carry that [score] because yesterday I got tangled up with the Croatian in the last race and lost about 30 places. After that I just wanted to go out with a bang and sail how I know I can. I had a couple of good races but I was just a bit early off the line on the last race [and was disqualified].

"[This week has been] a lot of what ifs or what could have been. The top couple of guys sailed pretty well and we weren’t even close to them in the end. It’s pretty hard to swallow right now after the buildup we had. We spent a lot of time here so I don’t really have an excuse."

Two other Kiwis were competing in Melbourne this week, with Josh Armit 37th in silver fleet and Luke Deegan 16th in bronze fleet.

Next month's Princess Sofia Regatta in Palma is the next regatta on the agenda for the Laser squad before attentions switch to Japan, where one will eventually compete for New Zealand at the Tokyo Olympics.

Results and standings from the Laser world championships in Melbourne: