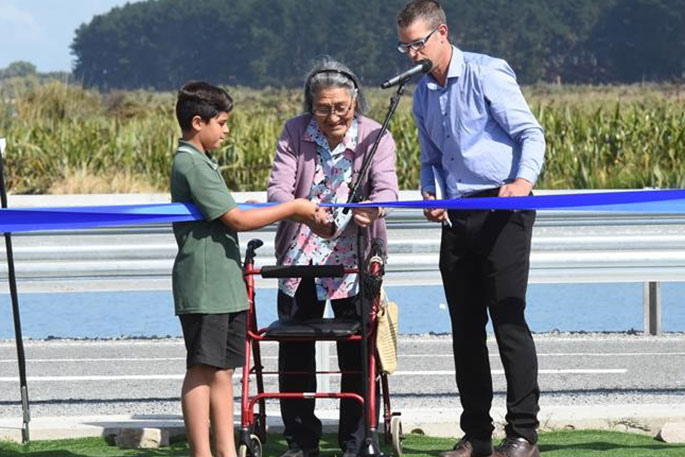 Tangata whenua, Maketū schoolchildren, and other locals gathered together with contracting staff, Bay of Plenty Regional Council and Western Bay of Plenty District Council representatives, to celebrate the return of freshwater flows from the Kaituna River into Te Awa o Ngātoroirangi/Maketu Estuary.

“Healthy waterways and environments are the foundation of a thriving community. This project has taken hard work, investment and collaboration from many local people and landowners over many years. It’s a great example of what can be achieved when everyone works together,” says Jane.

“Today marks a turning point for estuary health but it doesn’t stop here. We’ve got more work to do, and many other projects already underway, to keep improving water quality and wildlife habitat throughout the Kaituna catchment." 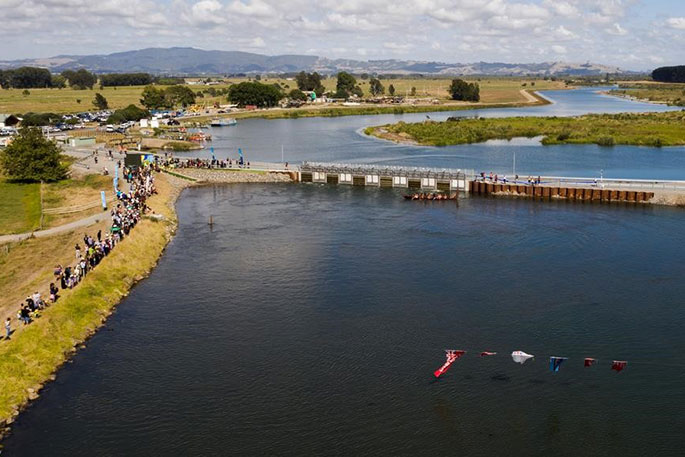 About 200 people gathered to celebrate the opening of the Kaituna River re-diversion control gates. Te Arawa waka paddlers paddled downstream under the flags of Te Arawa towards the Maketu estuary as the new flow gates were officially opened.

Bay of Plenty Regional Council Kaituna Catchments Manager Pim De Monchy says the local community has been calling for freshwater flows to be restored to the estuary since the 1970s.

“There had been a noticeable decline in estuary health since the Kaituna River was diverted out to sea at Te Tumu Cut in 1956 by the Crown and Regional River Board for land drainage purposes. The estuary had silted up, become choked with algae, and birds and fish had lost their breeding and feeding grounds.

“Through this project, up to 20 percent (600,000m3) of the Kaituna River’s flows will now be returned to the estuary on every tidal cycle, while maintaining existing levels of flood protection and boat access through the Te Tumu Cut." 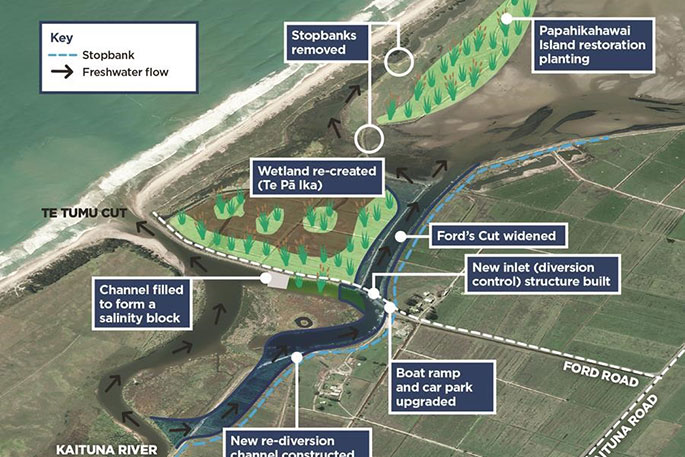 Bay of Plenty Regional Council has invested $16.6m (including design, consultation, consenting and land acquisition costs) to complete the project.

J Swap Contractors Limited began construction work in June 2018 and have now completed it, on budget and five months ahead of schedule.

They have widened the Ford’s Cut Channel, moved and upgraded stop banks, and installed a new 60 metre wide channel (one kilometre long) to carry freshwater from the Kaituna River into the Maketu Estuary via 12 large culverts, fitted with automatic gates, under the Ford Road bridge. 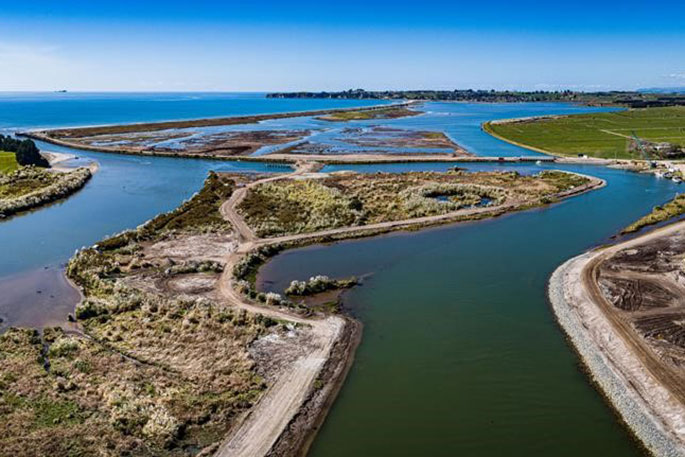 The contractors installed a new salinity block downstream of the new channel, to reduce saltwater intrusion into the upper estuary, and upgraded the Ford Road boat ramp facilities. They also re-contoured low-lying paddocks beside the upper estuary, to create 20 hectares of estuarine wetland. Volunteers have helped to plant the new wetland called Te Pā Ika with 65,000 native plants.

Pim says since 1956, it has taken 15 tidal cycles to flush the estuary with river water, but it will now take only two and a half tidal cycles when all twelve of the new culverts are open.

“For the first year of operation we’ll be allowing the estuary to adapt gradually by opening just nine culverts on each incoming tide, and monitoring that closely before we open all twelve.

“The increased flushing and improved salinity balance that the restored river flow will bring, along with the 20 hectares of wetland we’ve re-created, will help the estuary to recover and become healthier for fish and wildlife to live in, and people to enjoy."