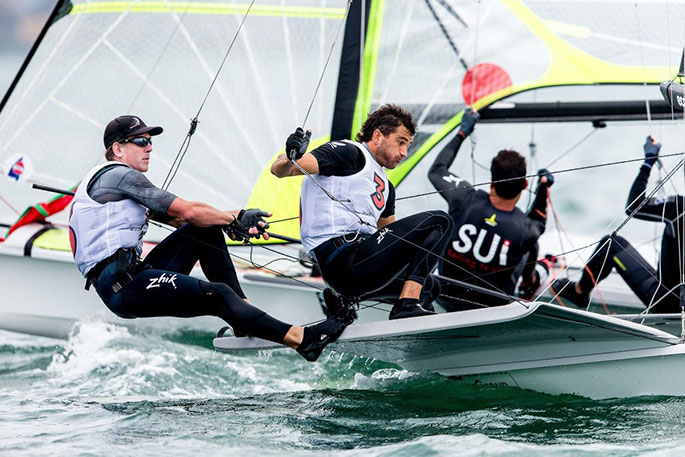 Peter Burling and Blair Tuke are exactly where they want to be heading into the second half of the 49er, 49erFX and Nacra 17 world championships in Geelong.

The five-time world champions banked another two race wins and a third to hold a narrow lead as the top boats move into three days of gold fleet racing.

Logan Dunning Beck and Oscar Gunn are also well placed in 10th overall, with Isaac McHardie and William McKenzie just behind in 11th.

It's often said the real racing doesn't start until gold fleet racing, when points can stack up quickly if mistakes are made, but it certainly helps to emerge from qualifying with a low scorecard.

"It was another good day for us with a 1, 3, 1 so we’re really happy to get through qualifying unscathed," says Tuke. "It’s been nice to put some firsts so far on the board.

"The competition gets a lot tougher in gold fleet and it’s harder to have those low scores so having a fifth as our worst race [and drop so far] is good. We’ll look to come out firing and put three good ones on the board tomorrow and keep the pressure on. It’s definitely coming to the business end, which is pretty exciting."

The Nacra 17 fleet of 34 boats is racing as only one fleet all week and some teams are already starting to stack up some bigger numbers.

Micah Wilkinson and Erica Dawson are still the top New Zealand boat in seventh overall but lost a little ground on the leaders, Great Britain's John Gimson and Anna Burnet, while Liv Mackay and Jason Saunders remained in ninth. Gemma Jones and Josh Porebski had a much better day than their first and climbed up to 14th overall and with it all still to play for.

"It was a day of survival for us," says Wilkinson. "We had the speed but small errors turned into a bit of a points bleed.

"That said, it was a good day on the water and we're looking forward to cracking into the last few days. There's a bit of breeze in the forecast so it's time to pucker up and send it."

The Lasers endured a late finish across town at their world championships with multiple general recalls and reset courses. The top three New Zealand sailors all had decent days to keep themselves in the hunt, with Tom Saunders ninth, Sam Meech 14th and George Gautrey 28th.

There's one more day of qualifying before the top third of the 124 boats battle it out in gold fleet.

"I had a couple of good results, although I made it look a lot harder than it probably should have been," says Saunders, who was fourth and third in his two races today. "It looks really easy for some people and really hard for others, which is frustrating, but it keeps me in the game.

"I'm just trying to keep pace and get through qualifying without having any big counters. I just need to keep getting off the line clean and sailing fast and hopefully find myself out in front. That's tomorrow's goal and I'll then reset and sharpen up for gold fleet."

Burling and Tuke are already at that point and are content with how they are sailing but know every point will count.

"I think the boat has been going pretty fast but we have also been making some good decisions and been putting the boat in good lanes," Tuke says.

"It’s been pleasing that we’ve managed to come back from positions where we’ve been quite deep early on in the race to still get those low scores and, in some cases even win the race, so that gives us a lot of confidence."

Results and standings from the 49er, 49erFX and Nacra 17 world championships in Geelong:

Results and standings from the Laser world championships in Melbourne: