Bromance in the garden 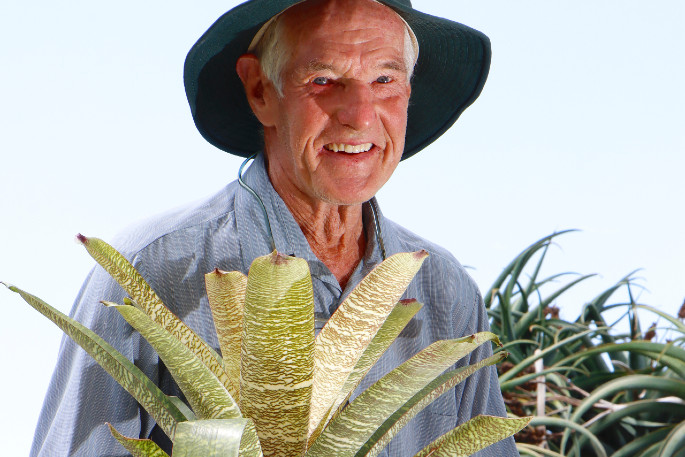 The rare, unusual and specialised all feature in Roger Allen’s garden.

It’s a plant, not just any plant, but a plant with a story. And Roger Allen tells that story with deep affection and respect.

“It’s taken 10 years to grow this Vriesea Bromeliad from seed.”

It’s a plant of 30 or 40 centimetres with lime green foliage giving way to the subtle pink of a sunset.

“Technically, I can’t register it until it flowers,” says Roger. “That could be another two years. But I have given it a name anyway.”

And that name is Audrey Hewson, a gardener in her nineties.

“She’s a dear friend who has been very generous in giving me plants and who didn’t have a very good year last year.” Now that friendship and generosity has been rewarded, and those difficult times eased.

Audrey was apparently “chuffed” to have a brand new hybridised bromeliad named after her. She just needs to see it flower before her name will live on in the garden. That would make her very proud.

The ‘Audrey Hewson’ just might be on display at the Bromeliad Club’s display and sales day Tauranga yacht Club at Sulphur Point next Wednesday, February 12, between 12pm and 2pm.There will be dozens of other offerings and gardeners will be able to access well-priced, rare, unusual and specialised plants which are not available at nurseries.

Visit Roger Allen’s spectacular Plummers Point property and you carried off into a living botanical compendium of bromeliads – all types and everywhere.

“It’s not an interest, it’s an obsession,” confesses Roger. “Plants eat into your soul and it follows you until death.”

And, he points out, bromeliad lovers are no more obsessive than golfers.

“There are some people who go out and hit golf balls every day. Would you believe it? But I shouldn’t make judgements.”

His fascination with plants began with cacti aged five.

“And when I married and we were moving from Christchurch to Waikato, my cacti collection was the first thing on the truck.”

The obsession became an occupation. Seventy-five years later he is a commercial flower grower producing hydrangea for the local market.

“But bromeliads are an unprofessional attraction.”

They are very easy to care for, the Vriesea is spineless, have spectacular flowers and very attractive foliage. The challenge for the professional comes with hybridizing, breeding new bromeliads and growing them to show quality.

And beyond the vast shade clothes that protect his income, that blaze of hydrangea colour, bromeliads rule in this sub-tropical hideaway.

“It actually keeps you young. An interest in a garden keeps you physical, keeps your mind alert and you young... yes, young, young.”

During the year Roger volunteers at the Te Puna quarry garden.

“My guess the average age of the quarry volunteers is about 85, which speaks for itself. They are brilliant.”

Roger’s property was one of the most popular parts of the garden trail for the Tauranga Garden and Art Festival.

“Some people did come into the garden and say, goodness gracious, this person is obsessed.

“They’re right. And it’s not going to change.”

Doesn’t breeding plants that take 10 to 12 years to flower and register cut into a man’s life?

“No. that’s why it keeps you young. You have to hang around for these things.”

The lifelong horticulturalist will be at the next Wednesday’s Bromeliad Club’s display and sale day at the yacht club at midday.

He will have some plants for sale and a wealth of wisdom to share.